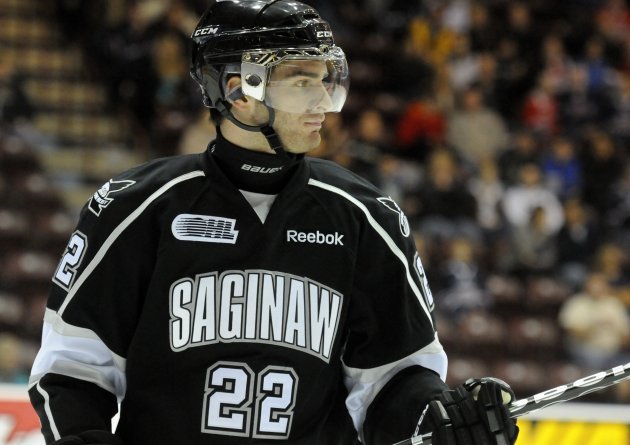 Toronto, ON – The Ontario Hockey League today announced that Brandon Saad of the Saginaw Spirit is the OHL Player of the Week for the week ending October 23 after leading the league with 10 points in three games scoring an impressive six goals with four assists and a plus-minus rating of plus-2.

The week was filled with personal-bests for Saad who led the Spirit to three straight wins on the road beginning Thursday night with a 5-2 win over the Brampton Battalion.  Saad recorded his first career five-point and four-goal game in the contest putting the Spirit on the board with a natural hat-trick to start the game at 14:29 of the first period on the power play, followed by two second period goals including one shorthanded marker which held as the game-winner.  His fourth goal also came on the power play in the third period and he was named first star of the game.  Saad then claimed second star honours on Saturday night in Peterborough scoring a goal in the 9-1 win over the Petes.  He finished the week with a four-point game on Sunday night against the Oshawa Generals as first star of a 7-6 win where he tallied a goal along with a career-high three assists.

Saad, who will celebrate his 19th birthday on October 27, is from Gibsonia, Pennsylvania, and playing in his second OHL season with the Spirit.  Selected 43rd overall in the 2011 NHL Entry Draft by the Chicago Blackhawks, Saad played two NHL games this season before returning to the Spirit where he has recorded 13 points in five games.

Also considered for the award this week was Nick Cousins of the Sault Ste. Marie Greyhounds and Matt Rupert of the London Knights who each scored four goals and two assists for six points in three games for their respective clubs.  In goal, Mark Visentin of the Niagara IceDogs won two games including a shutout victory posting a goals-against-average of 0.50 and a save percentage of .984.