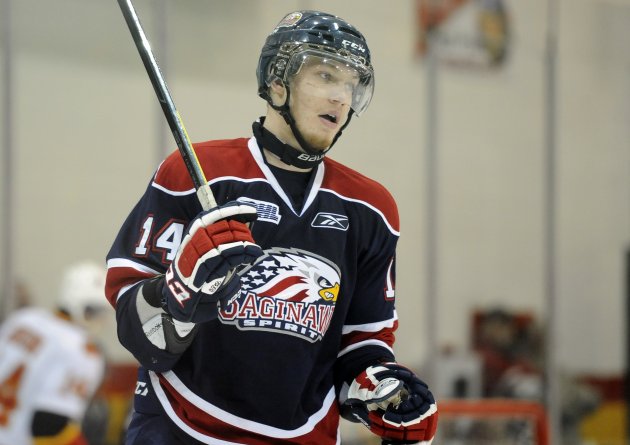 Players who make the jump from minor midget to the Ontario Hockey League often go through an adjustment period, but the same can be said for older players making their OHL debut.

Saginaw Spirit defenceman Jamie Oleksiak has been getting used to the OHL game after previously playing U.S. college hockey.

“I think there’s definitely been an adjustment period for me. Obviously it’s a little different than college,” said Oleksiak, the 6’7” first round pick of the Dallas Stars. “There’s more games, the scheduling is a little different…but I think it’s just what I need to get that experience and get to the next level – hopefully make it there. It’s been a great experience for me personally and I’ve really enjoyed it.”

Entering this weekend, Oleksiak has seven points in 23 games while keeping his plus/minus right around the even mark despite the Spirit allowing more goals than they have scored this season.

“You have to prepare yourself a little differently with this schedule. After the game you always have to watch what you eat and take care of your body because you may have a game the next day,” explained the Toronto-native.

“Even during the games, you kind of have to play more of a systematic game, you have to stick more to your game – you can’t be running all over the ice. Especially as a defensive defenceman like me, I think it’s definitely been a big part of what I’ve learned game-to-game, staying within your game and staying within your ability and just play your game.”

Oleksiak holds both Canadian and American citizenship and has spent time playing hockey on both sides of the border.  When it comes to international play, he has elected to be considered for Team Canada. As part of that, he recently played in the SUBWAY Super Series.

“It’s obviously a huge honour and it’s something that a lot of people look at and watch. I think it’s a prestigious (event) and I was glad to be there and be a part of it.”

The ups and downs of the adjustment to the league Oleksiak has experienced mirror some of the challenges the Spirit have faced throughout the season.

The mid-Michigan club has not had its full line-up available for most of the year.  Despite the rough start, there is a confidence in their dressing room that once the club comes together – they will be able to compete in the tough Western Conference.

“We just have to get that chemistry down, a lot of new guys and we’re just getting used to working with each other,” said defenceman Brad Walch.

“Hopefully we get hot later in the season here.”