Spirit trio of Wilde, Jenkins and Coskey hoping to impress at next level with Islanders 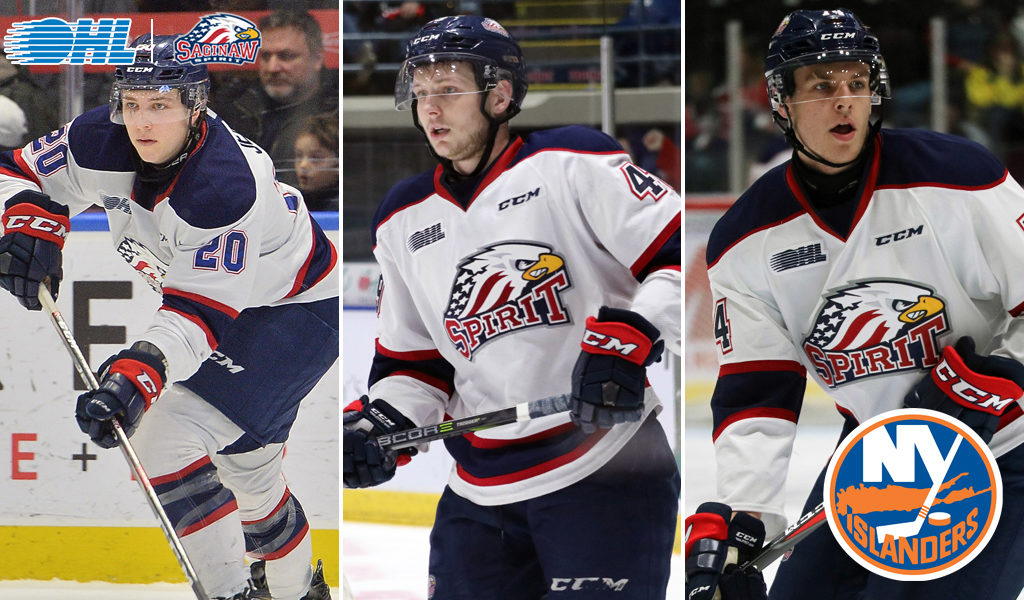 The Saginaw Spirit were coming off a dominant 2019-20 season atop the West Division, gearing up for what was poised to be an impressive postseason run. The skillful trio of Blade Jenkins, Cole Coskey and Bode Wilde were set to be a big part of that.

Now, the three of them are officially ready to carry their talent and chemistry to the next level within the New York Islanders organization.

The Islanders announced late last month they’d signed Jenkins, a third year OHLer and 2018 fifth round pick, to a three-year entry-level contract. They also announced the signing of overager Coskey, who was picked up in the 2019 NHL Draft. The two skaters join Wilde, a seasoned defender and second round 2018 NHL Draft pick, as the latest products out of Saginaw to be inked by the organization.

It’s a dream come true for Jenkins to see the result of three seasons of hard work pay off. The news also came as a relief; with the signing deadline approaching, the 19-year-old forward admitted he was nervous about whether or not things would end up working out the way they did. But his confidence never wavered.

“I was thinking I only have a month really to figure out what’s going on,” Jenkins said. “But as soon as they were in touch it was a really quick process. You definitely feel more confident when you’re hearing from the team and things are going in the right direction.”

Third-year veteran one of a pair of @SpiritHockey forwards to sign a three-year entry level #NHL contract with the @NYIslanders.

Over his third season with the Spirit, Jenkins took strides toward becoming more NHL-ready and worked hard on strengthening his overall 200-foot game. In his 47-game season, cut short by a lower-body injury, he amassed 40 points while working on improving his consistency and accountability in all three zones.

“I think that was my biggest takeaway from the season, playing consistent each and every night,” he said. “Just being a more well-put player throughout all three zones.”

In terms of what he feels he needs to do to impress at the next level, he said it’s going to boil down to maintaining that consistency and using his 6-foot-2 size to his advantage.

“You look at all these guys that make it to the next level, they’re willing to play and sacrifice in all three zones,” he said. “It’s a big thing to do that, especially being a bigger player. Just be simple and let everything take over. When I do that, that’s when things happen.”

Over parts of the past two seasons, Wilde has had a front row seat to the hard work put in by Jenkins and OHL veteran Coskey, who reached a career-high 80 points in his fifth season and became the club’s new all-time leader in games played with a total 302 appearances in a Spirit jersey. He’s also no stranger to a taste of the professional life himself, having spent most of the 2019-20 season in Bridgeport. Though the beginning of his stint was spent on the sidelines recovering from an ankle injury sustained ahead of training camp, it was an opportunity he used to observe and take note of the habits of his older teammates.

“I was watching all these older guys and how they take care of their body, how they train and get ready for the next game, and stay healthy throughout the whole season so I think that was the number one thing for me,” Wilde recalled.

Following his recovery, he suited up for 20 games with the Sound Tigers and registered two assists. He was ultimately returned to Saginaw for the final stretch of what would be his second stint with the Spirit; having played in the United States National Team Development Program before opting to develop in the OHL.

In terms of the speed at which he was able to find his rhythm at the AHL level, Wilde said it boiled down to repetition.

“I think I picked it up quicker than I expected because at the end of the day, it’s just hockey,” said the 20-year-old defender.

Upon returning to Saginaw, Wilde pitched in for 11 points in 11 games and acted as somewhat of a guiding force for Jenkins and Coskey, doing his part to help prepare them for the differences that inevitably come with the jump to pro hockey.

“I passed on as much as I could think of off the top of my head whenever we’d have conversations. In practice too, just based on habits that I felt would maybe help them at the pro level,” he said.

As for the off ice lessons that have helped him most, Wilde credits the preparation and development he’s earned as a member of the Spirit organization.

“I think that Saginaw has done a good job of training a culture that is very pro-like, so the transition for me was really not that difficult and I think it’ll be the same for them.”

Jenkins is determined his 200-foot game and willingness to put his body on the line make him a good fit for the Islanders organization. He’s hopeful he’ll get the chance to play with teammates Wilde or Coskey down the road, but at this point, getting his foot in the door is the start he’s been dreaming of and experiencing the journey alongside some familiar faces has made it that much more enjoyable.

“When you’re going somewhere with not too many faces you know, it’s nice to have someone there you can interact with and having that comfortability level makes it a little bit easier,” he said.

While familiarity factor may be more present for Wilde, he, too, anticipates having both players as teammates once again at the next level.

“Having the history that we do is pretty cool. I think it adds a bit of motivation for us to all get through the final destination together, because obviously that’d be a pretty incredible story,” Wilde said.