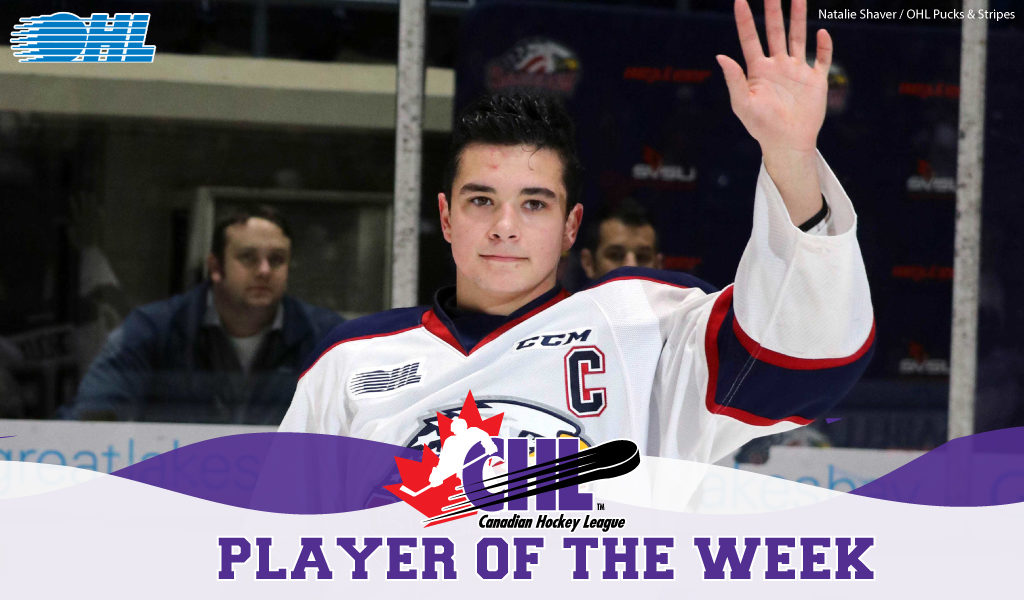 Toronto, ON – The Canadian Hockey League today announced that Minnesota Wild prospect Damien Giroux of the Saginaw Spirit is the CHL Player of the Week for the regular season week ending October 14 after scoring four goals and three assists for seven points in two games with a plus-minus rating of plus-7.

Giroux contributed to seven of the Spirit’s eight goals last week helping extend their winning-streak to five games for a hold of first place in the OHL’s West Division standings with a 6-2-1-0 record. His first of back-to-back multi-point performances featured a career-high five points and first hat-trick scored entirely in the third period to earn first star honours of a 6-2 win over the North Bay Battalion. On Sunday the first year captain scored the game-winning goal for the second straight game and added one assist as second star of a 2-1 victory over the Kitchener Rangers.

An 18-year-old from Hanmer, Ont., Giroux is playing in his third season with the Spirit after being chosen by the club in the third round of the 2016 OHL Priority Selection. So far this season he’s produced six goals and five assists for 11 points in nine games following a sophomore season of 19 goals and 24 assists for 43 points in 68 games. Giroux was picked by the Wild in the fifth round of the 2018 NHL Draft in June.

Also considered for the award this week was forward Brett Leason of the Prince Albert Raiders who scored five goals and three assists for eight points in three games, and top 2020 NHL Draft prospect Alexis Lafreniere of the Rimouski Oceanic who scored twice with seven assists for nine points in four games.