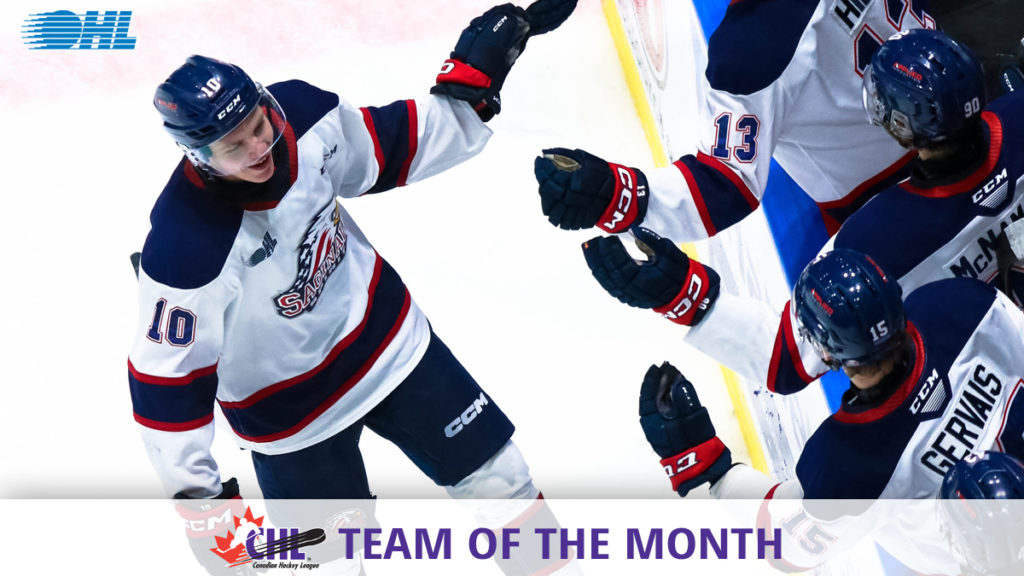 The Canadian Hockey League announced today the November edition of the CHL Team of the Month for the 2022-23 regular season.

Leading the forward ranks is 2023 NHL Draft prodigy Connor Bedard of the Regina Pats who through 11 appearances registered 11 goals and 17 assists for 28 points. Among the highlights in November was a five-point outing against Edmonton in which the gifted centre scored once alongside a season high of four assists. Currently riding a 25-game point streak, on the season the 17-year-old native of North Vancouver, B.C., leads the WHL with 57 points in 26 games.

Also up front is Columbus Blue Jackets 2022 third-round selection Jordan Dumais of the Halifax Mooseheads who impressed with 27 points counting seven goals and 20 assists across 13 contests. Twice in November, the talented right-wing put up a six-point outing – the first seeing him notch five assists versus Moncton and the second counting his third hat-trick of the season. An 18-year-old native of Ile Bizard, Que., Dumais leads the QMJHL with 54 points in 24 outings.

Rounding out the forward group is Kelowna Rockets left-wing Andrew Cristall who collected nine goals and 14 assists for 23 points in nine games. Facing Prince George in early November, Cristall impressed with a season high of five points – all coming as assists. On the season, Cristall has tallied 43 points in 21 games, trailing only Bedard for tops in WHL scoring. A 17-year-old native of Burnaby, B.C., Cristall projects as an early-round selection in the upcoming NHL Draft per Central Scouting.

On the blue line, Lukas Dragicevic of the Tri-City Americans shined with 18 points counting five goals and 13 assists coming in 11 appearances. Currently riding a 17-game point streak, through November that stretch counted five consecutive games in which Dragicevic finished with a multi-point performance. An anticipated early-round selection in the 2023 NHL Draft per Central Scouting, on the season the 17-year-old product of Richmond, B.C., leads all WHL rearguards with 32 points in 23 games.

Also on the back end is Saginaw Spirit blue-liner Pavel Mintyukov who dazzled with six goals and 11 assists for 17 points in 11 outings. Twice in November, the 19-year-old Russian rearguard finished with a three-point night, including his most recent outing where he notched one goal and two assists in a 7-2 win over Windsor. Selected 10th overall by the Anaheim Ducks in the 2022 NHL Draft, Mintyukov sits second in OHL scoring this season where through 24 appearances he has recorded 12 goals and 23 assists for 35 points.

Between the pipes, Victoriaville Tigres netminder Nathan Darveau surrendered a lone regulation loss through 10 appearances, posting a record of 8-1-1-0 alongside a .953 save percentage and 1.60 goals-against average. Among the highlights was a 2-1 road win in Cape Breton to close out November that saw the 19-year-old goaltender turn aside a season high of 41 shots. Appearing in his third season with the Tigres, the native of Rouyn-Noranda, Que., has found the win column in 12 of his 21 appearances while ranking amongst QMJHL leaders with a .942 save percentage and 1.93 goals-against average. 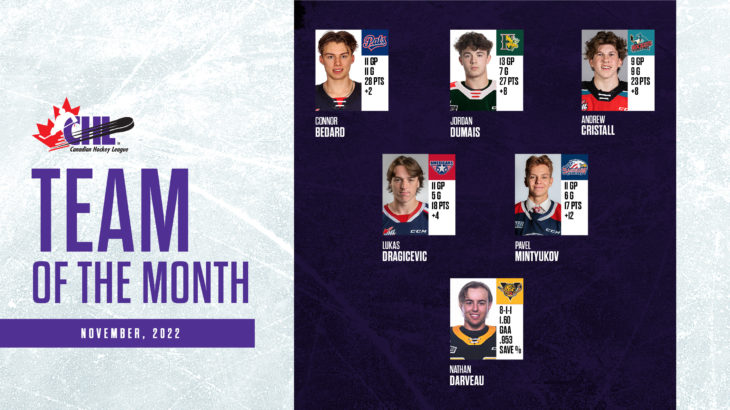