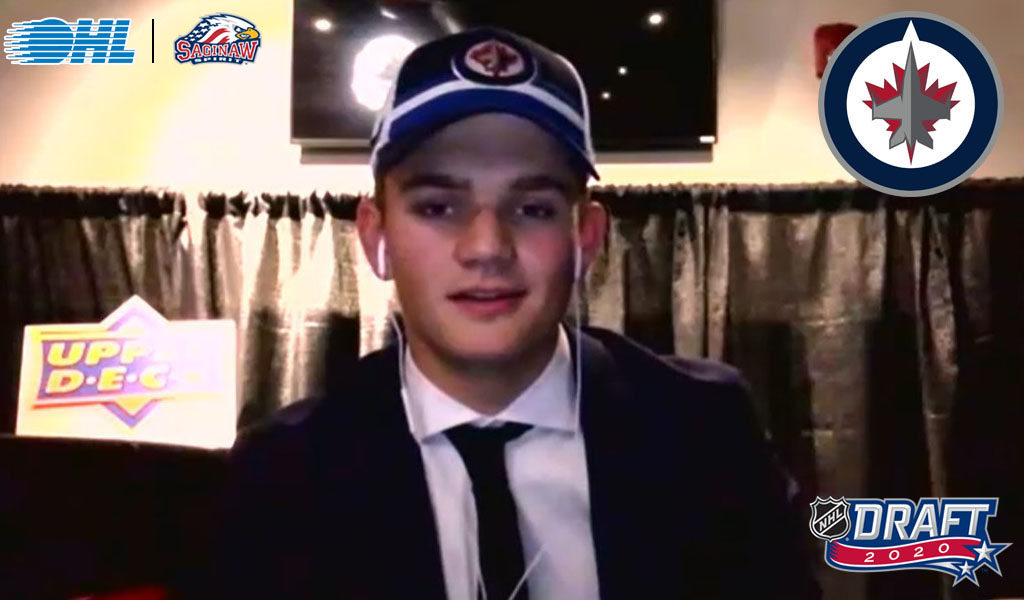 Cole Perfetti always wanted to be a superstar.

Claimed 10th overall by the Winnipeg Jets, the Saginaw Spirit forward was among the 31 OHL players whose childhood dreams came true when they heard their names called out at the 2020 NHL Draft.

For Perfetti, the dream started long ago. A so-called “hockey nerd” since he was young, he remembers looking up hockey highlights on YouTube on his dad’s computer with a burning passion for the game fueled by the OHL talent he was lucky enough to have a front seat to.

Growing up in Whitby, Perfetti’s family billeted a number of Oshawa Generals players when he was younger. Having older billet brothers in Andy Andreoff, Jeff Brown and Cole Cassels meant spending lots of time around the team on a consistent basis and a resulting desire to, like them, impress in the OHL.

He was around six-years-old, he recalls, when he was mesmerized by what John Tavares was able to do with the Generals.

“I would come to the rink and watch him play, day in and day out,” Perfetti remembers. “Seeing what he did in the OHL was pretty special. He’s definitely one of those guys that has stuck out to me ever since I was a little kid, was an idol of mine growing up.”

Growing up watching @Oshawa_Generals stars like @91Tavares inspired Cole Perfetti (@ColePerfetti91) to follow a similar path in the #OHL where he’d dominate with @SpiritHockey and eventually land with @NHLJets 10th overall at the 2020 #NHLDraft.#MeetTheFuture | @KubotaCanadaLtd pic.twitter.com/UxxgcEX3K5

It’s no coincidence he sports 91 on the back of his sweater, just like his idol.

“I didn’t get to pick my number for a couple years, but the first year I was allowed to pick a number I immediately chose 91 after him. I wanted to be a superstar like him one day. He was my favourite player growing up.”

Coming off a record-setting 111-point sophomore season with the Spirit, the 18-year-old forward has, of course, more than made a name for himself already. His 200-foot game, superior hockey IQ and superb playmaking ability had put him high on the NHL Draft radar and, as a result, he became the highest ever drafted player out of the Spirit organization.

Now, as the newest member of the Jets, he’s well on his way to fulfilling that NHL dream and, with nods to the Spirit’s and OHL’s development, remains inspired by Tavares’ start with the Generals.

“It was pretty amazing to watch what he could do as a 16, 17-year-old in the league. Being able to see that, it definitely just made me want to eventually some day play in the NHL and be as good as him. When you’re able to see a superstar up close and personal, it just connects and hits home and makes you want to play even more and be that good,” he recalls.

“You can definitely learn a lot from him from the stories I’ve heard, how good of a hockey player he was, but how good of a person and how dedicated he was, especially in hockey. It’s no coincidence that he’s a superstar, he did everything right, and it was evident in Oshawa that he would do that. It was pretty awesome being able to grow up and watch him five minutes from my house.”

And when your NHL dream has just begun, being a good person goes a long way. Upon hearing his named called, Perfetti received a text from Jets forward Mark Scheifele – another prominent OHL name, and another player he’s looked up to.

It’s reminiscent of when he was six-years-old, welcomed by the superstars in Oshawa who would inspire him to follow in their footsteps.

“I’ve been a big fan of his for years now,” he said of Scheifele, his future teammate. “He’s a great player and he seems like a great guy off the ice. To be able to come into an organization and play with guys of his calibre…he’s a real true pro. I really feel welcomed.”