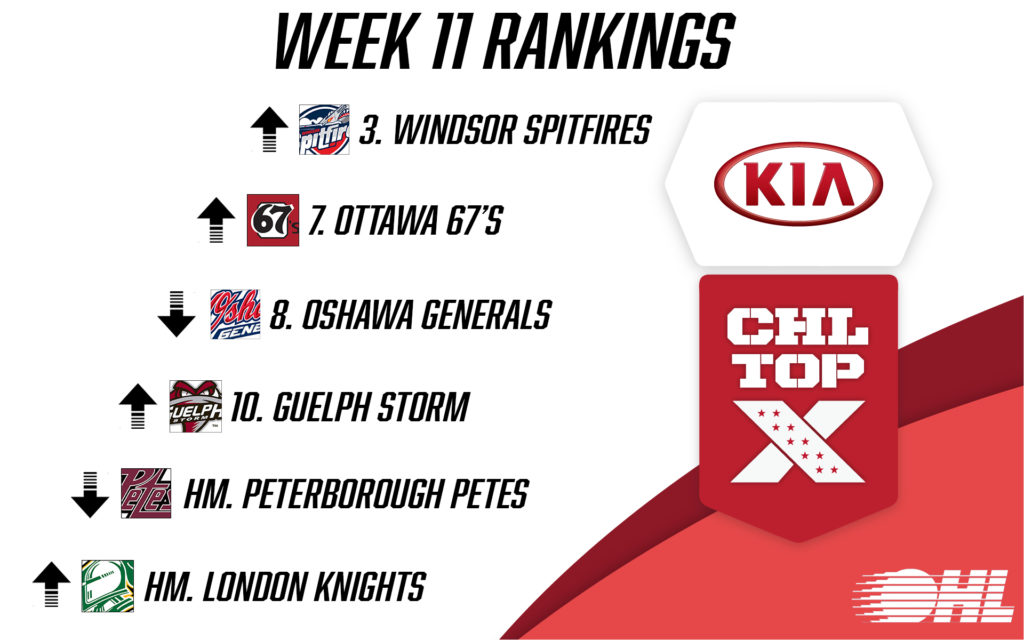 Toronto, ON – The Canadian Hockey League today announced the week 11 edition of the Kia CHL Top-10 Rankings for the 2019-20 season.  The weekly rankings of the CHL’s Top-10 teams are selected by a panel of National Hockey League scouts.

The Windsor Spitfires are up to third on the weekly rankings as a result of a 13-game point streak that dates back to October 12th. Windsor has won three straight, getting consistent production out of veteran winger Cole Purboo (11-12–23) who rides a 13-game point streak. The Spits boast the both the OHL’s top power play (33.8%) and penalty kill (85.7%) under head coach Trevor Letowski as big Dallas Stars prospect Curtis Douglas (11-12–23), hard-working centre Tyler Angle (14-14–28) and Vegas Golden Knights prospect Connor Corcoran (7-15–22) have also been keys to success.

The Ottawa 67’s are on the rise to sixth on the list, entering a Wednesday night tilt against Kingston as winners of four straight. Ottawa has had no problem producing offence, with 2020 NHL Draft prospect Marco Rossi (10-29–30) having registered points in 18 of his 19 games this season. Overage addition Joseph Garreffa (12-11–23) has proven to be a great pickup, slotting into the place of the injured Graeme Clarke (7-2–9) who will remain sidelined well into the new year. Noel Hoefenmayer leads all OHL defencemen with 30 points (7-23–30) over 24 games this season.

The Oshawa Generals are down to eighth on the list, making the Top 10 for the ninth time this season. The Gennies took a commanding 7-0 win over visiting Sudbury on Sportsnet Sunday afternoon as goaltender Zachary Paputsakis earned his first career OHL shutout and draft eligible defenceman Lleyton Moore scored his first in a Generals uniform. Fast approaching on the calendar is a Saturday afternoon clash between the Generals and 67’s in the nation’s capital.

The red hot Guelph Storm are into the Top 10 for the first time this season, having won 11 of their last 12 contests. The defending OHL champions have been outshot in 16 of their 22 games this season, but the fine goaltending of Nico Daws and Owen Bennett has helped the Storm play to a 10-6 record in those contests. Daws, who represented the OHL in the CIBC Canada Russia Series, leads the league with a 2.21 goals-against average and .934 save percentage over 15 games. The Storm have been led offensively by 19-year-old winger Pavel Gogolev (13-24–37) and captain Cam Hillis (8-25–33).

The Peterborough Petes received an honourable mention after taking five of a possible six points last week to improve to 16-6-1-1.

The London Knights are also in the honourable mention category, riding a four-game winning streak into a weekend three-in-three against Windsor, Flint and Sault Ste Marie. 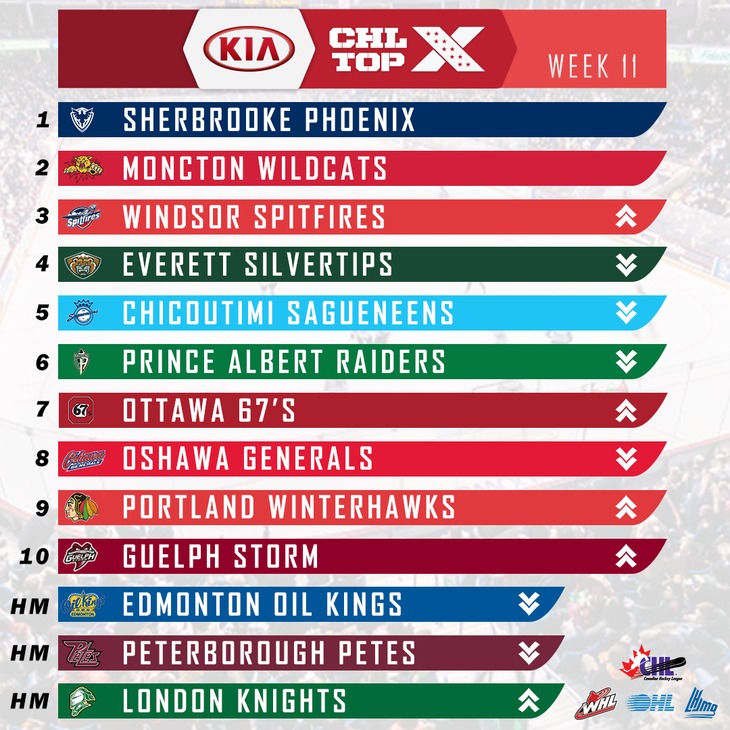