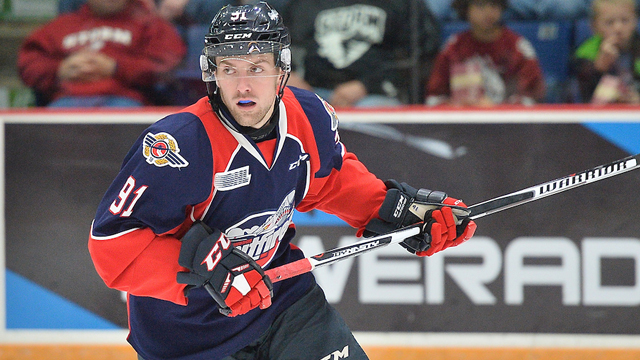 Toronto, ON – The Canadian Hockey League today announced that forward Aaron Luchuk of the Windsor Spitfires is the CHL Player of the Week for the week ending October 29 after recording nine points in three games including four goals and five assists with a plus-minus rating of plus-2.

Luchuk delivered two multi-point performances last week for the Spitfires who picked up a pair of victories on the road.  His week was highlighted by a career-high five points in a 7-2 bounce back effort Friday night against the Sudbury Wolves following a 4-0 loss on Thursday to the North Bay Battalion.  The five-point production included his first career hat-trick and earned him one of two straight first star honours.  He also received first star recognition on Sunday with a goal and three assists in a 5-4 win against the Owen Sound Attack finishing the week tied for the lead in overall OHL scoring with 28 points and alone atop the goals race with 15.

A 20-year-old from Kingston, Ont., Luchuk is playing in his fourth full season with the Spitfires who chose him in the fourth round of the 2013 OHL Priority Selection.  The overage forward was named team captain to start the 2017-18 campaign after helping the club capture their third Mastercard Memorial Cup title scoring the game-winning goal on home ice last May.  His 28 points in 15 games so far this season bring his offensive totals to 163 points in 221 career games.