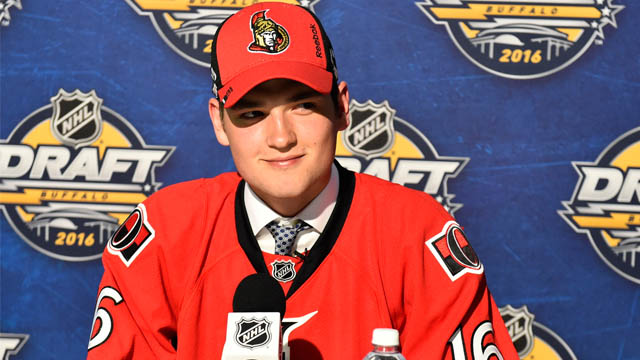 Brown, 18, was the Senators’ first-round pick (11th overall) at June’s NHL Draft in Buffalo. He established new major junior career highs with 74 points (including new highs of 21 goals and 53 assists) and 40 penalty minutes while appearing in 59 regular-season games in his second full campaign with the Ontario Hockey League’s Windsor Spitfires in 2015-16.

A native of St. Louis, Brown helped the United States earn a bronze medal at the 2016 IIHF U18 World Junior Championship in Grand Forks, N.D., after the Spitfires were eliminated from OHL post-season play last April where he ranked third among Americans and fourth among tournament players with 12 points (three goals, nine assists) over seven contests.

Additionally, Brown was an invitee to Team U.S.A.’s National Junior Evaluation Camp which took place in Plymouth, Mich., earlier this month. The week-long camp is held annually in preparation for the IIHF U20 World Junior Championship which will take place in Montreal and in Toronto beginning in late December of this year.