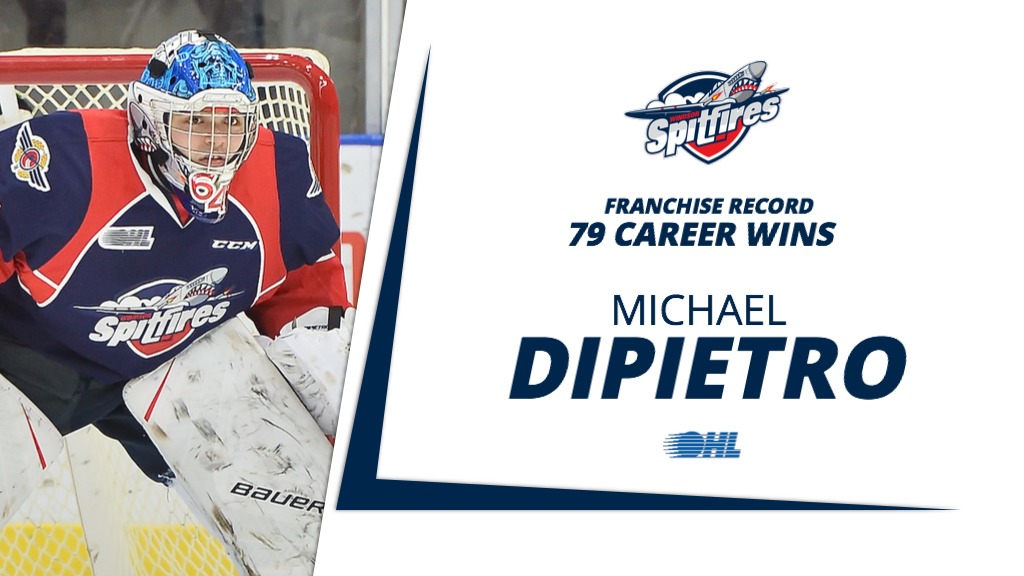 Michael DiPietro stopped 33 of the 34 shots he faced on Sunday in Owen Sound as the Windsor Spitfires took a 6-1 win to snap a four-game slide.

The win is the 79th of DiPietro’s OHL career, placing him ahead of Andrew Engelage (2006-09) for the most in Spitfires franchise history.

A native of nearby Amherstburg, Ont., DiPietro was Windsor’s second round (23rd overall) pick in the 2015 OHL Priority Selection and has played to a 79-45-8-5 record over four seasons, posting a 2.56 goals-against average and .913 save percentage over 146 regular season games. He also holds franchise records for the most shutouts in a single season (7) as well as the most over the course of his career (16), one shy of an OHL record.

I remember how nervous I was before my first start for Windsor. Now, a franchise record 79 wins later, and I’m nervous about how to word this tweet! Thank you to my amazing parents for endless support. Lastly, thank you to @SpitsHockey for the amazing memories and more to come! pic.twitter.com/wMr0pdJSxL

The third round (64th overall) pick of the Vancouver Canucks in the 2017 NHL Draft hoisted the Memorial Cup as a member of the host Spitfires in 2017 before capturing OHL Goaltender of the Year honours in 2017-18.

DiPietro’s presence has also been felt on the world stage where he starred at the 2016 World Under-17 Hockey Challenge and was named to Canada’s roster for the 2018 IIHF World Hockey Championship in Denmark where he worked alongside professional OHL graduates in Connor McDavid (Edmonton Oilers/Erie Otters), Ryan O’Reilly (St. Louis Blues/Erie Otters), Bo Horvat (Vancouver Canucks/London Knights) and Aaron Ekblad (Florida Panthers/Barrie Colts).