OHL ‘On the Run’ Player of the Week: Michael DiPietro 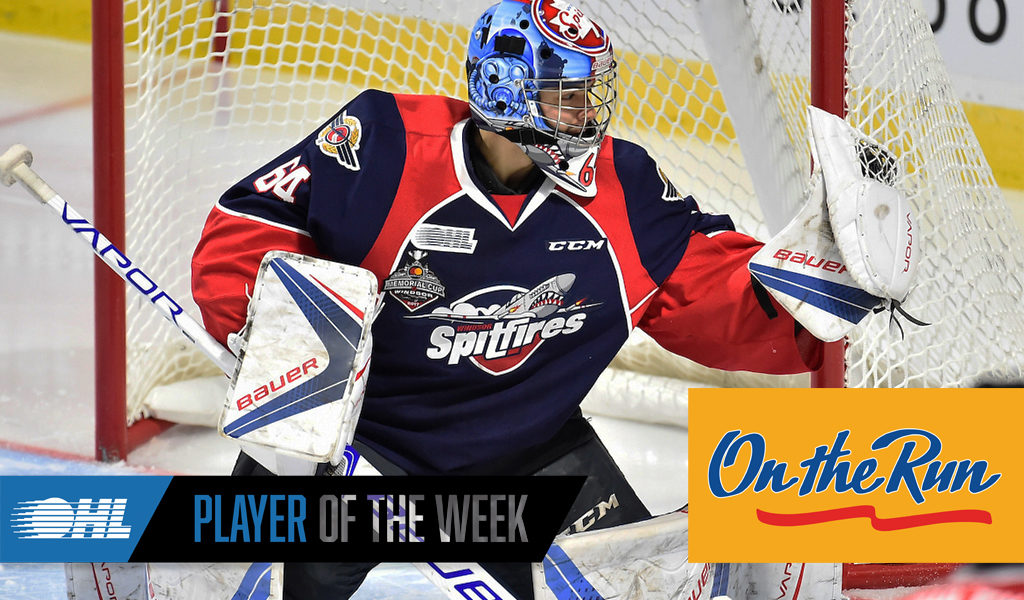 Toronto, ON – The Ontario Hockey League today announced that Vancouver Canucks prospect Michael DiPietro of the Windsor Spitfires is the OHL ‘On the Run’ Player of the Week following the first week of 2017-18 regular season action ending September 24.

DiPietro backstopped the defending Mastercard Memorial Cup champions to a perfect 3-0 record making 86 saves and earning one shutout victory along with a goals-against-average of 1.00 and save percentage of .966.  In his return to WFCU Centre ice for the first time since hoisting the Memorial Cup in May as a tournament all-star and top goaltender, DiPietro began the season with a 26-save performance as the Spitfires celebrated #OHLOpeningWeek with a 3-1 victory over the Saginaw Spirit.  DiPietro continued his solid play between-the-pipes with back-to-back first star efforts including 30 saves on Friday in a 5-2 road win over the London Knights, and on Sunday with 30 stops at home blanking the Guelph Storm by a 4-0 score for the league’s first shutout of the new campaign.

An 18-year-old from Amherstburg, Ont., DiPietro is playing in his third OHL season with the Spitfires who chose him in the second round of the 2015 OHL Priority Selection.  In 51 regular season appearances a year ago he posted a 30-12-4-2 record with a team record six shutouts along with a 2.35 goals-against-average and .917 save percentage.  Last year’s six shutouts were not only a franchise mark, but contributed to setting a new career mark for Spits netminders which now stands at nine following Sunday’s win.  DiPietro was a third round pick of the Canucks in the 2017 NHL Draft.

Watch video highlights of DiPietro and the Spitfires against the Spirit, Knights, and Storm.

Also considered for the award this week was Luke Burghardt who helped the North Bay Battalion open the season with a 2-0 record scoring five goals and one assist for six points while earning first star recognition twice.  2018 NHL Draft prospect Allan McShane of the Oshawa Generals led the league with seven assists in a pair of road wins, and Tampa Bay Lightning prospect Taylor Raddysh of the defending OHL champion Erie Otters scored once with five assists for six points in three games.