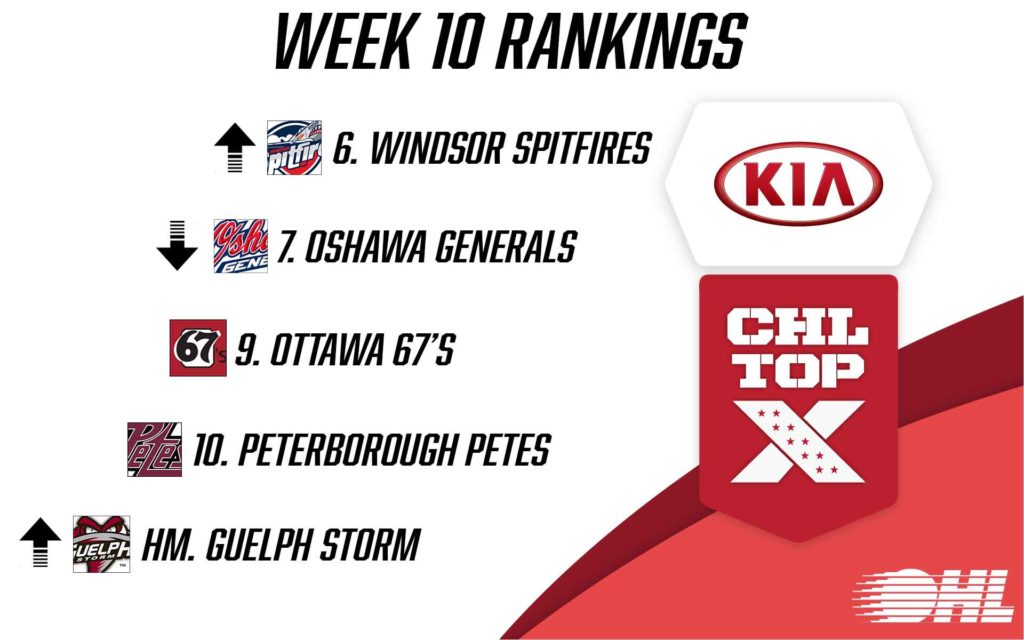 Toronto, ON – The Canadian Hockey League today announced the week 10 edition of the Kia CHL Top-10 Rankings for the 2019-20 season.  The weekly rankings of the CHL’s Top-10 teams are selected by a panel of National Hockey League scouts.

The Windsor Spitfires rise one spot to sixth this week following back-to-back overtime finishes on either side of the ledger. The Spits defeated the Erie Otters 7-6 on the road Friday night as Curtis Douglas knotted things up with 22 seconds left in the third period, setting the stage for a Connor Corcoran game winner. The Spits then dropped a 3-2 decision in Niagara on Saturday. Windsor owns a 12-3-3-0 record atop the West Division and prepares to host the Soo Greyhounds on Thursday.

The Oshawa Generals had a rough weekend up north and fall to number seven on the list. Oshawa dropped back-to-back road decisions against Sudbury and Sault Ste. Marie. The Gennies combined for just two goals in the two losses but managed to hold the opposition under 30 shots on goal on both occasions. Oshawa looks for a rebound performance when they head north again on Thursday, tangling with the North Bay Battalion.

The Ottawa 67’s hold steady as the ninth ranked team in the country for a third straight week following a 2-1 showing on their West Division road trip. Ottawa fell 4-3 to the Saginaw Spirit, surrendering a last minute game winner on Thursday before responding with 4-2 and 6-3 wins over the Flint Firebirds and Sarnia Sting on Saturday and Sunday. Overage winger Joseph Garreffa has been hot of late, putting up 11 points (7-4–11) over his last four outings while 2020 NHL Draft prospect Marco Rossi comes off a four-point showing on Sunday. Ottawa returns home for back-to-back games this weekend, taking on Sudbury and Mississauga on Thursday and Saturday.

The Peterborough Petes are hanging around the Top-10 again this week, occupying the 10th and final spot on the list. The Petes defeated the Niagara IceDogs 6-5 in overtime on Thursday before being blanked 2-0 on the road in Barrie on Saturday. With Wednesday’s 4-3 win over the Hamilton Bulldogs, the Petes boast a league-leading 31 points with a 15-6-1-0 record. Peterborough remains without injured Toronto Maple Leafs prospect Nick Robertson who hasn’t played since November 5th.

The defending OHL champion Guelph Storm earns an honourable mention thanks to their current nine-game winning streak, the club’s longest since 2013-14. Guelph leads the Midwest Division with a 12-4-1-2 record. 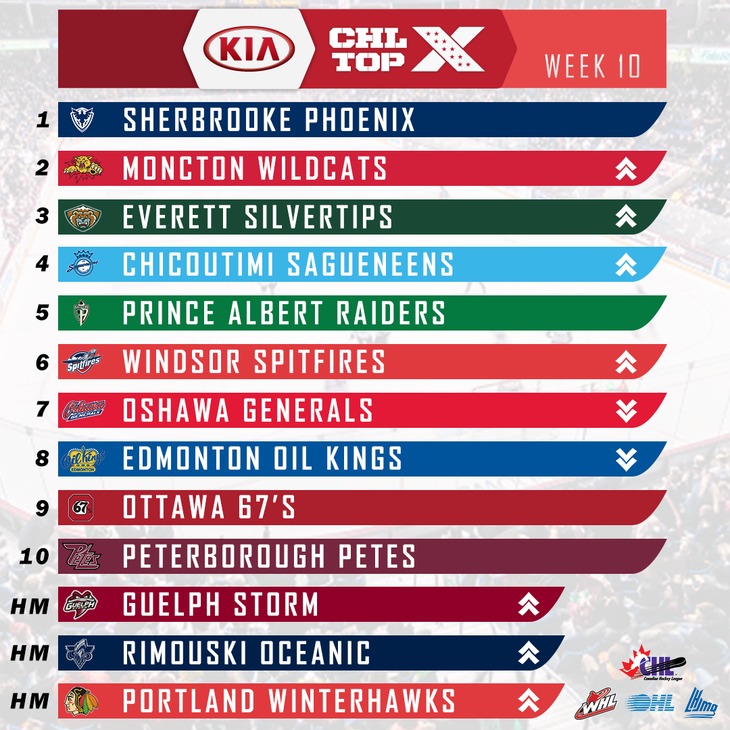