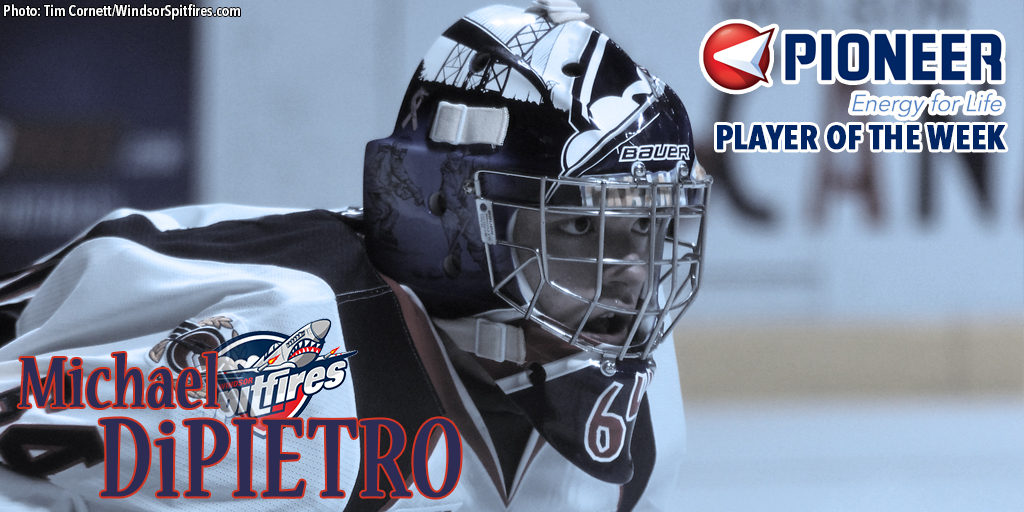 Toronto, ON – The Ontario Hockey League today announced that 2017 NHL Draft prospect Michael DiPietro of the Windsor Spitfires is the Pioneer Energy OHL Player of the Week for the week ending December 11 after posting a 3-0-0-0 record with three shutouts for a goals-against-average of 0.00 and save percentage of 1.000.

DiPietro was perfect in goal last week turning aside all 64 shots he faced backstopping the Spitfires to a trio of road victories to reclaim first place in the OHL’s West Division standings with a 21-5-4-0 record.  The sophomore netminder spoiled the holiday fun in Barrie, Sudbury, and North Bay blanking the hometown opposition in all three of their annual Teddy Bear Toss promotional nights.  On Thursday night he earned first star honours with 21 saves in a 3-0 win over the Colts, then stopped 22 shots on Saturday in a 6-0 win over the Wolves, and ended the week Sunday with a 21-save performance as first star of a 3-0 win against the Battalion.  DiPietro’s shutout-streak now stands at 204:16 and approaches recent marks set by Owen Sound’s Jordan Binnington (211:32, 2012-13) and Niagara’s Mark Visentin (237:53, 2011-12).

A 17-year-old from Amherstburg, ON, DiPietro now leads the OHL with four shutouts while carrying the league’s lowest goals-against-average with a mark of 2.11 and highest save percentage at .922.  The second round pick of the Spitfires in the 2015 OHL Priority Selection has made 22 appearances this season for the Mastercard Memorial Cup hosts and carries a 15-3-4-0 record.

Watch video highlights of DiPietro and the Spitfires against the Colts, Wolves, and Battalion. 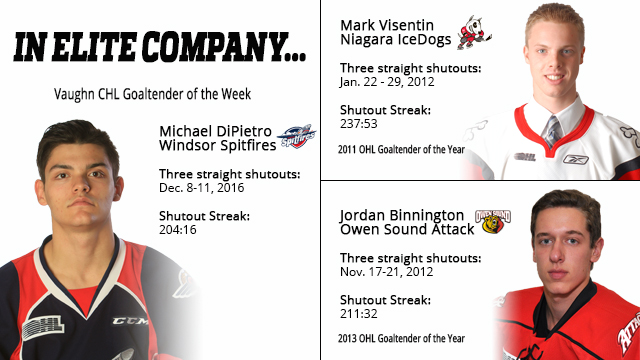 Also considered for the award this week was Hayden Hodgson of the Saginaw Spirit who scored seven goals and two assists for nine points in three games, Los Angeles Kings prospect Spencer Watson of the Mississauga Steelheads scored six goals and one assist for seven points in his first three games of the season, and Anaheim Ducks prospect Jack Kopacka of the Sault Ste. Marie Greyhounds who scored six goals in three games.