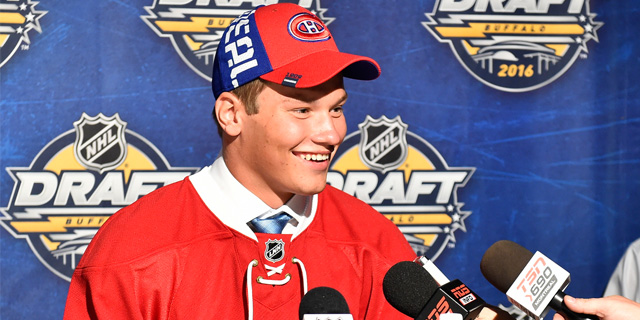 MONTREAL – Montreal Canadiens general manager Marc Bergevin announced on Friday that the team’s first-round pick in 2016, defenseman Mikhail Sergachev, has agreed to terms on a three-year, entry-level contract (2016-17 to 2018-19).

The 18-year-old Nizhnekamsk, Russia native was the Windsor Spitfires’ third-leading point-getter in 2015-16, amassing 17 goals and 57 points in 67 regular season games in his first year in North America. Thirty-one of Sergachev’s points (8G, 23A) came on the power play. He also registered a plus-15 differential, served 56 penalty minutes, and added two goals and five points in five OHL playoff outings.

Sergachev was the ninth-overall selection at the 2016 NHL Entry Draft in Buffalo.

He will be one of 45 players taking part in the Canadiens’ development camp beginning on Sunday.

The Canadiens agreed to terms on a three-year, entry-level contract with Mikhail Sergachev. https://t.co/vdFgYJaZsL pic.twitter.com/RW3JkAreug