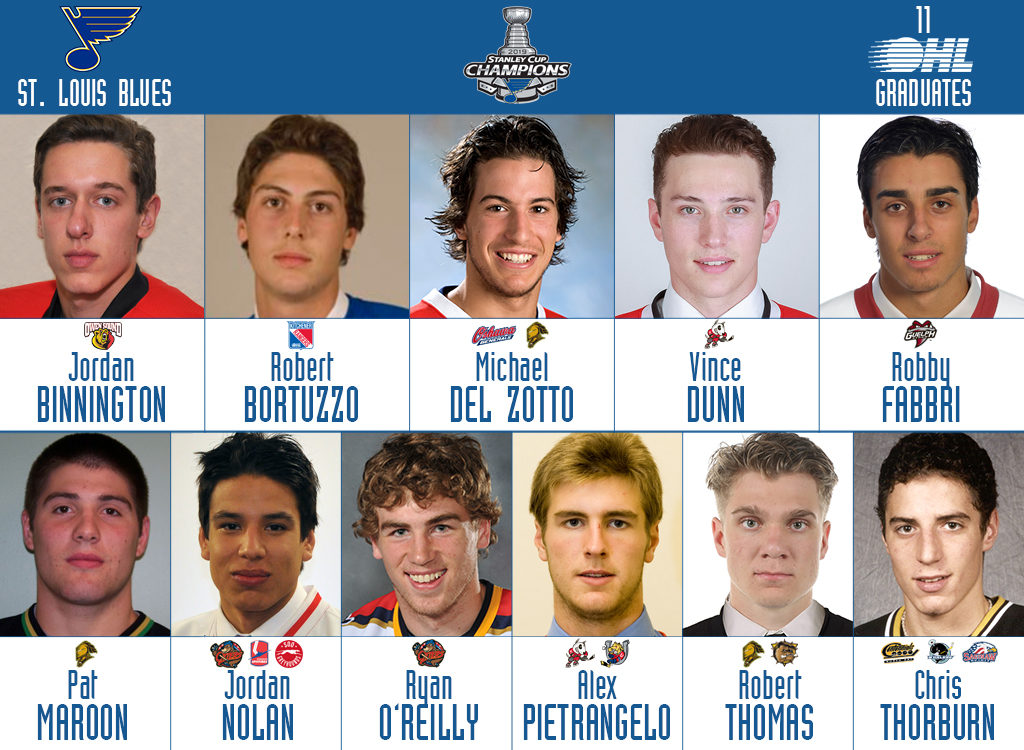 The St. Louis Blues are Stanley Cup champions for the first time in their 52-year history and the ride was far from ordinary. Wednesday’s 4-1 road win over the Boston Bruins in Game 7 of the Stanley Cup Final capped what is one of the most remarkable turnarounds in NHL history.

The Blues were the League’s last place team as the calendar turned to 2019, responding by putting together a 30-10-5 showing through the final 45 games of the regular season to clinch third place in the Central Division. The march up the standings coincided with a change behind the bench as associate coach Craig Berube was appointed interim head coach only weeks earlier.

Much like the 2019 OHL champion Guelph Storm, the Blues seemed to get better as each progressive playoff series wore on. In the end, the Blues would tie NHL records by playing 26 playoff contests and a total of 108 since the regular season began back on October 3rd.

While several staff members with OHL roots including assistant coaches Steve Ott and Mike Van Ryn played important roles, players developed in the OHL had a significant impact as 11 alumni were part of the club’s playoff roster. Here’s a closer look at the contributions made by OHL products as the St. Louis Blues capped off the 2018-19 NHL season by capturing Stanley Cup glory in Game 7.

From the @sarampage to the @StLouisBlues
and now a #StanleyCup, goaltender Jordan Binnington has shown the world what he’s capable of.

The sound Robby Fabbri makes when he lifts the Stanley Cup 😂😂 … I’m so happy for #15. pic.twitter.com/Js328yPJ8P

“I couldn’t be more proud to be from St. Louis.” – @patmaroon#StanleyCuppic.twitter.com/hiUxOZ1XLC

Still so cool to see Chris Thorburn have his moment with the Cup. What a great story for him and his family #StlBlues pic.twitter.com/gcFxE95lCC