Stars give OHL talent a Texas-sized welcome on draft day 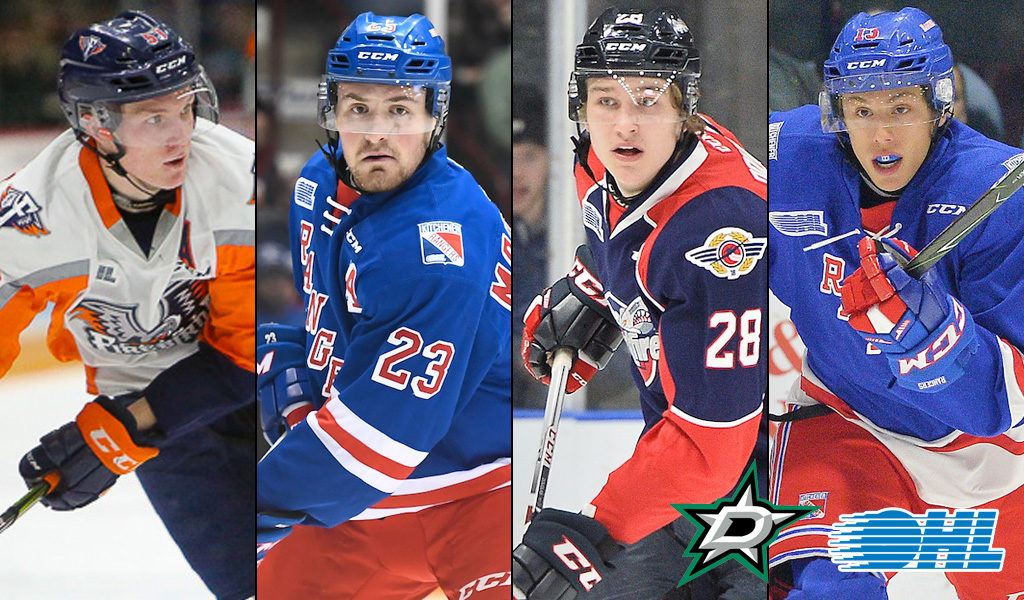 For four OHL forwards, draft day had a special twist in Dallas this past month as Ty Dellandrea (Flint Firebirds), Adam Mascherin (Kitchener Rangers), Curtis Douglas (Windsor Spitfires) and Riley Damiani (Kitchener Rangers) got a Texas-sized welcome from the host Stars and their fans.

Dallas went back to the OHL well this summer, making it eight straight years of selecting OHL talent at the NHL Draft with past picks that include such names as Jason Robertson (2nd round, 2017), Radek Faksa (1st round, 2012) and Brett Ritchie (2nd round, 2011).

Dellandrea got things started for the Stars at 13th overall as franchise cornerstones Mike Modano and current captain Jamie Benn approached the podium to make the announcement.

After a battle with celiac disease, a healthy Ty Dellandrea is ready to make an impact for the @DallasStars. https://t.co/5XRFI30V7S

“It was unbelievable,” Dellandrea said, recalling the moment. “Two guys that you look up to in the hockey world for years [and] to be able to have your name called by Jamie is something I’ll remember for the rest of my life. Amazing.”

A player who will be remembered as the first Flint Firebirds first round draft pick to suit up for the club, Dellandrea’s game has steadily matured under head coach Ryan Oulahen. The Port Perry, Ont. native increased his offensive production from 24 points  (13-11–24) as a 16-year-old to 59 (27-32–59) as a sophomore this past season.

The Firebirds opened up considerable ice time for Dellandrea in late November when veteran and fellow Stars prospect Nicholas Caamano along with overage centreman Ryan Moore were dealt to the eventual OHL champion Hamilton Bulldogs. The 18-year-old says he benefitted from the expanded role.

While Stars superfans were out getting their custom-made Dellandrea jerseys, general manager Jim Nill and his staff kept busy with the selections of Swedish forwards Albin Eriksson and Oskar Back in the second and third rounds before stepping up to take another well-known OHL commodity.

The story I did on Adam Mascherin during last month’s development camp: https://t.co/rXlUTfSx4E

While it’s become increasingly rare to see CHL players drafted twice, Adam Mascherin joined the ranks of OHL names in Nick Boynton, Michael Rupp, Tim Brent and Mike Zigomanis when the Stars took him in the fourth round with the 100th overall pick.

A high-scoring star just four points shy of 300 on his OHL career, Mascherin has put up 35 goals or more in each of the past three seasons and is likely to make his way to the AHL this fall. Originally a second round pick of the Florida Panthers in 2016, Mascherin wasn’t interested in signing with the club (as per Panthers GM Dale Tallon) and the Stars took advantage, drafting and promptly signing the stocky winger to a three-year entry level deal.

“I didn’t even hear my name because the home crowd cheered, so I didn’t hear who picked me on the TV,” Mascherin told NHL.com’s Mark Stepneski of his experience as he watched on a TV at the American Airlines Center. “My agent called me and said, ‘You are going to a great spot.’ I said, ‘What spot?” Then he said it was Dallas and I said, ‘Oh, that makes sense.’ I was really excited. It was funny.”

Just six picks later, Dallas went the OHL route once again with the selection of 6-foot-8, 250Ib. forward Curtis Douglas of the Windsor Spitfires. The 18-year-old had a productive second half following a mid-season trade to the Spits that saw OHL scoring champion Aaron Luchuk go the other way to Barrie.

“I couldn’t be happier, I don’t think you’ve seen me without a smile on my face so far and it couldn’t be more exciting for me,” he beamed.

Fourth round pick @curtisdouglas17 stands at 6’9″ and had a hunch that his name was going to be called by the Dallas Stars. #NHLDraft pic.twitter.com/9wljIEBEp6

Douglas, who put up 46 points (22-24–46) this past season, has continued to grow into his big frame, a process he admits has come with its challenges.

“I was 190-pounds before I started my minor midget year, I was an absolute rake,” he joked. “Now I’m at 250 and I’m feeling really good about my weight, I’ve been really focusing on nutrition and on my leg strength and growing into my body. It’s really something I’ve had to struggle with and it’s been hard work. If I can utilize that I think it can go a long way towards me helping the Dallas Stars organization.”

The Stars returned to Kitchener in the fifth round, selecting speedy Rangers forward Riley Damiani at 137th overall. Damiani put up 37 points (19-18–37) during the regular season before helping the Rangers reach Game 7 of the Western Conference Final with 12 points (5-7–12) in 19 playoff matchups.

The 5-foot-10, 165Ib. forward expressed his gratitude to coach Jay McKee for helping him take big strides as a sophomore.

“He gave me every opportunity, a chance to really show what I had and my defensive ability is one of my strengths for sure. Being able to play against top guys gave me a taste of what it’s going to be like at the next level. Playing against NHL-calibre players and draft picks was amazing and it really furthered my development, especially in the playoffs.”

Dallas rounded out the proceedings with the selection of a pair of WHL names in Red Deer Rebels defenceman Dawson Barteaux and Kamloops Blazers forward Jermaine Loewen, the first Jamaican-born player to ever be drafted by an NHL team.

In total, Dallas’ six CHL selections were second-most only to the Toronto Maple Leafs who had seven.

While the NHL Draft is a special day for any player, hearing your name called by the host team followed by the roar of the hometown crowd is an experience few will ever have. Regardless of where their hockey careers take them, these four OHLers will always have that memory.