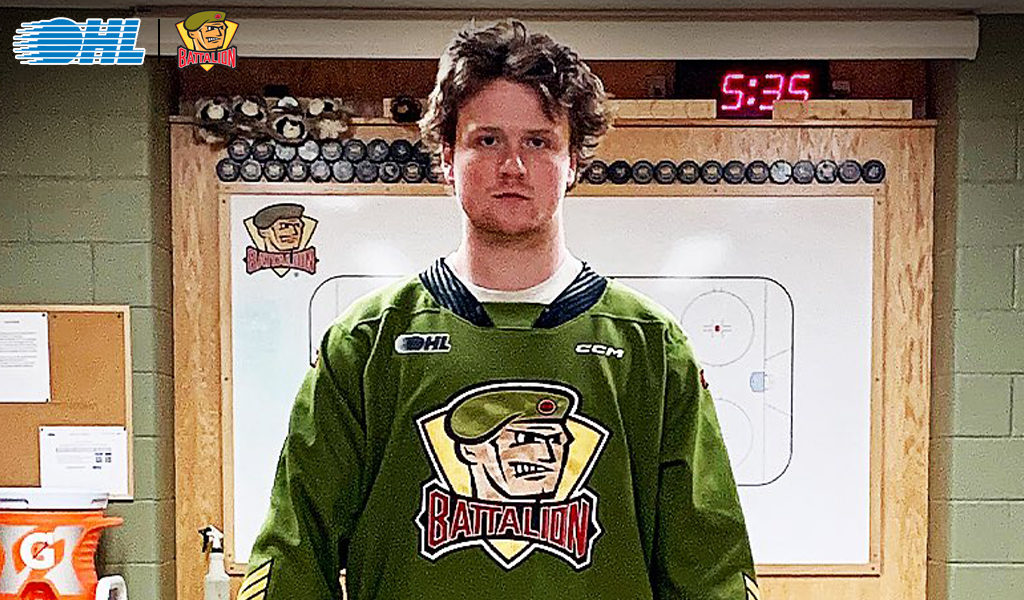 NORTH BAY, Ont. — Justin Ertel made it to North Bay on Friday.

Left winger Ertel signed a standard player’s agreement, including an education package, with the Ontario Hockey League’s North Bay Battalion after being a third-round pick in the 2019 OHL Priority Selection from the Toronto Red Wings minor midgets.

“Obviously, it was a long road to get here, but I’m happy to be here,” said Ertel.

A third-round choice, 79th overall, of the Dallas Stars in the 2021 National Hockey League Draft, the Kitchener native turned 19 on May 27.

“Getting to play pro faster was a big part of this decision,” allowed Ertel. “Being drafted is a really cool accomplishment, but you’ve got to make something with it.”

Ertel, six-foot-two and 187 pounds, played 23 games last season with Cornell University of Ithaca, N.Y., scoring one goal and adding eight assists for nine points with the Big Red. In 2020-21, he had nine goals and 19 assists for 28 points in 18 games with the junior A Summerside Western Capitals of the Maritime Junior Hockey League.

“The player that Justin is today is because of all the experience that he’s had,” said general manager Adam Dennis.

“He’s been able to step into different locker rooms over the pandemic, going to school, going to university and playing with men, and been a great person throughout and been a contributor wherever he’s gone. He’s a guy that for a long time we wanted to make this day happen, and thrilled is an understatement.”

Dennis said Ertel helps make North Bay bigger, stronger and older, all attributes that proved important last month when the Battalion was swept in the Eastern Conference Championship Series by the Hamilton Bulldogs, who went on to win the OHL title.

“The level he was playing is as close to pro hockey as you’re going to get, when you’re playing 24-, 25-year-old guys, and roles are different. What you’re going to see when he’s playing against kids his own age in our league is he’s going to be a much more offensive contributor. He’s going to be put into situations where he can succeed. It speaks to his game that he can play anywhere in the lineup.”

Ertel, who acknowledged “I don’t think I was ready, back when I was 16 or 17, to play,” said he can help the Troops now.

He said he’s well aware of the strength of the Battalion’s returning roster.

“I came here to win. I understand that they have a lot of really good pieces that fit for this year, and obviously I’m going to try to play as big a role as I can and just try to contribute to the team’s success.”

Ertel is the third generation of his family to join North Bay’s OHL entry. His grandfather Bob was general manager of the Centennials, and his father, Tyler, played for the predecessors to the Battalion, scoring 54 goals and earning 79 assists for 133 points with 187 penalty minutes in 119 games over two seasons culminating in 1989-90.

“My dad has told me a lot of really good stories about North Bay and what to expect, but I really want to come here and make a name for myself,” noted Ertel.

Dennis pointed to Ertel’s signing as evidence of the Battalion’s reputation, both on and off the ice.

“We want to build a program that people want to come play for, and I really give our coaching staff and our players from this last year all the credit in the world, because, when I’m making calls, they may look up the team, and it’s a lot easier when the team’s doing well.”

alumni U Sports
U SPORTS Report: OHL grads atop the leaderboards
5 hours ago