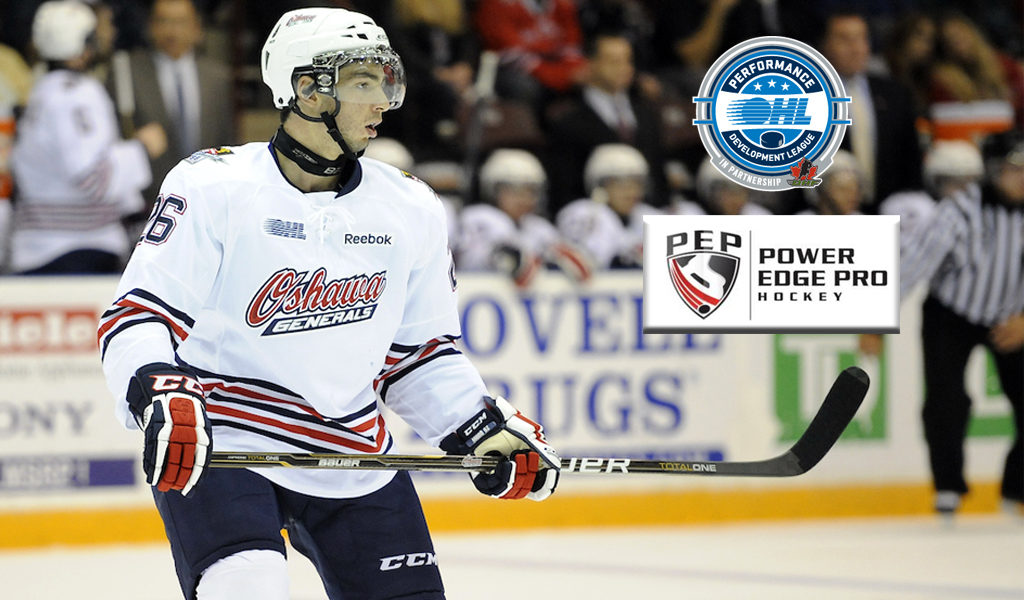 Nick Quinn is focused on innovation and improvements to today’s game.

One of the esteemed program’s main focuses is on Reactive Countering Training™, and one of the main improvements Quinn touts is helping players react at top speed in small areas.

“You need to be able to execute three or four skills at once to excel in today’s game, and that’s what we’re teaching with reactive countering,” Quinn explained.

“Can you react to top speed in small spaces? When the opposing team gives you an opportunity, most players can’t. The inside game is where opportunities lie and most players don’t have the skills to execute.”

“You need to be able to execute three or four skills at once to excel in today’s game.”@Oshawa_Generals graduate Nick Quinn, VP of @PEPHockey joins the #OHL This Week Podcast and looks ahead to this spring’s #OHLPDL.

PEP, founded by Quinn’s father Joe, is currently partnered with six NHL teams and boasts over 100 NHL players on their program including John Tavares, Taylor Hall and Max Domi. They also work with many of the game’s rising stars at the OHL level including Cole Perfetti, Quinton Byfield and Shane Wright.

The level of talent is a testament to the type of training PEP offers, as is the program’s ambassador in Connor McDavid, who has trained with them since the age of 10.

“When you look at the players we train, the players that I’ve trained for years, they attack the inside space all game long,” said Quinn of PEP’s training regiments.

“So that’s kind of what we focus on: overloading the motor skills and trying to get players in situations to be able to execute three or four skills at once.”

But when your ambassador is, arguably, the best player in the world, the challenge lies in continuing to challenge them.

“[McDavid] comes back every year and we’re trying to make it tougher because he wants a challenge,” said Quinn.

“Nobody works harder than him, so that’s kind of our job: to keep challenging him.”

And in keeping with the goal to remain innovative and cutting edge, in the works is new testing gear that will revolutionize the way player development is tracked by way of pinpointing player strengths and identifying areas of improvement to a further extent.

“I think it’s going to be huge for the youth to be able to track their development and see how far they might be off guys like [McDavid] or Perfetti or Wright,” said Quinn.

“We’re all about innovating and taking players out of their comfort zones and really just trying to challenge guys.”

The #OHL Performance Development League is back!

In partnership with @OHFHockey and @PEPHockey, the #OHLPDL is an off-season development initiative targeted at young players incorporating Small Area 3-on-3 games.

Quinn and PEP will be taking their talents to the OHL’s newly relaunched Performance Development League in Kitchener, Oakville and Whitby this spring.

The development initiative spans 11 weeks and incorporates Small Area 3-on-3 Games with weekly skill specific development sessions. One of the enhancements to the program includes on ice skills with PEP, a perfect fit for a program honing in on Small Area reaction.

“It’s going to be some of the best 2006-2007 born players in Ontario,” said Quinn. “For the players who haven’t been exposed to PEP at that age group, it’s going to be awesome to see how some of these top players train like McDavid and Jack Hughes. I also think it’s going to give them a bit of an eye opener to what training is like at the next level, and how intense it is.”

Training at the next level is something Quinn has experience around. The Markham, Ont. native played two seasons with the Generals from 2010-12 and put up 35 points (2-33—35) over 103 games.

His former teammates Boone Jenner and Scott Laughton, now with the Columbus Blue Jackets and Philadelphia Flyers respectively, are among that reputable list of NHL skaters on the PEP roster.

“Scotty and Boone come back every offseason and come to our pro camp. They’re just really good guys,” said the former OHL defenceman, who looks back on his Oshawa stint fondly.

“The city was awesome, the fans were second to none, my billets were amazing. The team is so community driven, and it’s still that way. I have nothing but good things to say and just loved my time in Oshawa.”

And in tandem with his good experiences came help with regards to the next step in Quinn’s career. He made good use of his OHL scholarship package, enrolling at the University of Guelph following his junior hockey stint. He credits his education and experience as essential building blocks he’s been able to put toward the work he does today.

“For me to get my schooling package while I played in the OHL was huge,” he said.

“Just the things I learned in my business classes at Guelph, then of course living on [my] own, putting in the work and the dedication…I’ve taken it to PEP. The opportunities the league gave me were fantastic.”