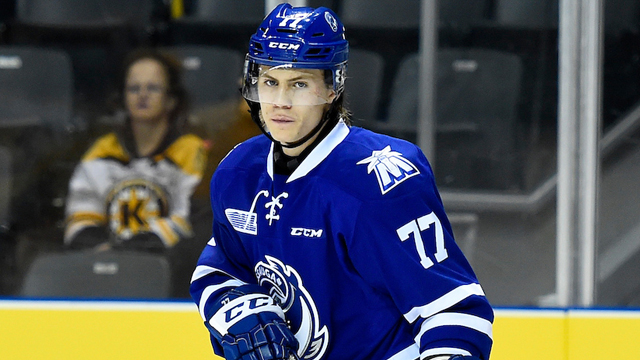 Toronto, ON – The Canadian Hockey League today announced that forward Albert Michnac of the Mississauga Steelheads is the CHL Player of the Week for the week ending November 5 scoring eight goals in three games with a plus-minus rating of plus-3.

Michnac’s eight tallies were spread across three multi-goal performances that helped the Steelheads earn five of a possible six points last week.  He received first star honours in all three games beginning Friday night with his first career hat-trick despite a 5-4 shootout loss to the Owen Sound Attack, then scored twice including the game-winner in Saturday’s 4-3 road win over the Sudbury Wolves.  Michnac finished the week with another hat-trick as part of a 9-2 victory over the first place Eastern Conference Peterborough Petes.

A 20-year-old from Prague, Czech Republic, Michnac is now tied for tenth overall in OHL scoring with 23 points in 17 games including 12 goals and 11 assists.  He joined the Steelheads as the club’s first round pick (37th overall) in the 2017 CHL Import Draft after competing last season as a member of the Guelph Storm where he tallied 15 goals and 24 assists for 39 points in 65 games.

Also considered for the award this week was Columbus Blue Jackets prospect Vitalii Abramov of the Gatineau Olympiques who scored five goals and three assists for eight points in four games, and forward Jermaine Loewen of the Kamloops Blazers with four goals and one assist for five points in two games,