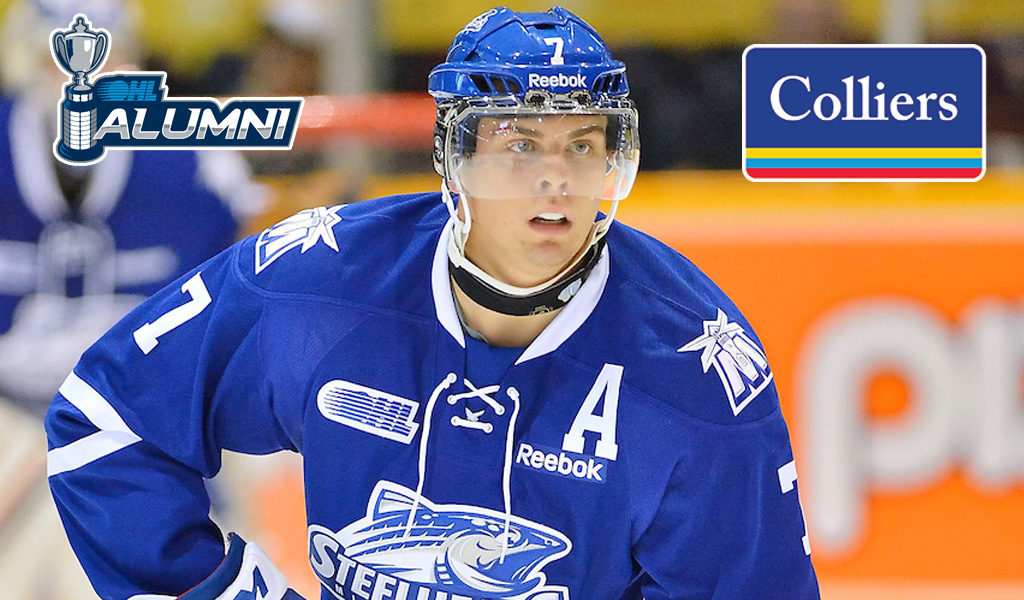 Alex Cord dished out body checks and blocked shots as a dependable shut down defender for the Mississauga St. Michael’s Majors and Mississauga Steelheads for four seasons. Today, he’s excelling in the commercial real estate market with Colliers, a Canadian-based international investment management company with more than 400 offices in 68 different countries.

Cord, who used his OHL Scholarship to attend St. Mary’s University in Halifax, Nova Scotia where he obtained a Masters in Business Administration and Bachelor of Commerce, earned Colliers’ ‘Rookie of the Year’ honours for his work as a Commercial Real Estate Advisor who specializes in the sale and leasing of Industrial properties in the GTA West market. Cord emerged as the award winner from a pool of Colliers employees across Canada.

Congratulations to Alex Cord, Sales Representative from our Toronto West office on his recognition as Rookie of the Year!

“It’s certainly an honour to be recognized for the hard work,” said Cord of the achievement. “I make a lot of cold calls and have had the pleasure of doing business with a lot of tremendous people.”

Now 28-years-old, Cord says the commercial real estate industry is one that features a number of ex-athletes. He’s been able to take the habits and routines he first formed during his time in Mississauga and apply them to his professional endeavours.

“It’s a cool industry. It requires a lot of persistence and the understanding that you have to follow a process, believe in it, and if you do, things may not come instantly but you’re going to bear the fruits of your labour down the road. There’s a lot of turnover within the first few years for some people starting out, but you have to stick with it.

“My road to this point has really shown me that hard work pays off.”

A 6-foot-2, 210Ib. defender during his time in the OHL, Cord recorded 32 points (7-25–32) over 196 regular season games in Mississauga while also attending NHL training camps with the Boston Bruins and Detroit Red Wings. His five-year U SPORTS career at St. Mary’s included 30 points (10-20–30) over 137 regular season games while patrolling the blue line for the Huskies.

“I keep in close contact with a few of my coaches and a lot of my old teammates,” said Cord. “In fact, my old coach James Boyd was a great reference for me in getting this job.

“The scholarship package was perfect,” he continued. “It was a very fortunate stepping stone for me. The combination of my ability to play at a high level along with the scholarly credentials I earned at St. Mary’s really prepared me to break into the professional world and have immediate success.”