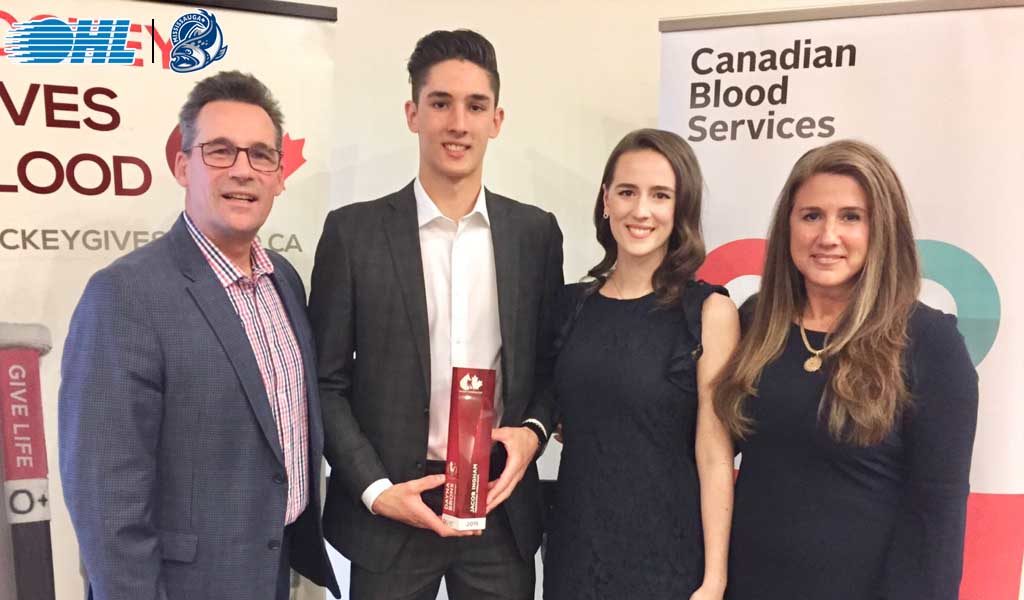 In April of 2018, the Humboldt tragedy claimed the lives of 16 people. Dayna Brons was the lone female on the bus, and the last to pass away five days after the crash. At 24 years of age, she was the team’s athletic therapist and like so many other Canadians she was also a blood donor. Dayna embodied the selfless traits of a blood donor – humility, charity and giving of oneself without want of recognition or accolades.

One positive outcome from the tragedy was the creation of Hockey Gives Blood, a non-profit organization that creates awareness about the importance of blood and stem cell donation amongst the Canadian hockey community.

On Friday March 8th 2019, the Mississauga Steelheads hosted their Inaugural Bleed Blue game in support of Hockey Gives Blood. Jacob Ingham donated $4 for every save made during his first 50 games of the season. His 1,393 saves totaled a donation of $5,572 to Hockey Gives Blood.

Ingham had a personal story attached to blood donation. He had just arrived back home from LA Kings development camp when he received news that his grandparents were in a serious car accident. Luckily through the generosity of blood donors, they were able to pull through.

The young goaltender, who was born and raised in Barrie, Ontario and lives there with his family during the off season, continues to encourage his teammates and followers on social media to roll up a sleeve. Ingham has since become a fierce advocate for Canada’s Lifeline and brought his own family in to donate blood. A few days ago, he had an opportunity to speak to Dayna’s parents and learn what it meant to them to have this award named after their daughter.

“Jacob is an outstanding player, person and leader with all the qualities Dayna was known for,” said Stu Middleton, Co-Founder, Hockey Gives Blood. “For these reasons, we are proud to announce that Jacob Ingham is the first ever recipient of the Dayna Brons Honorary Award – Congratulations Jacob!”

To hear more about Jacob’s story from this season and how his team rallied around him, check out the video here: https://www.youtube.com/watch?v=wfOymjTWMBY