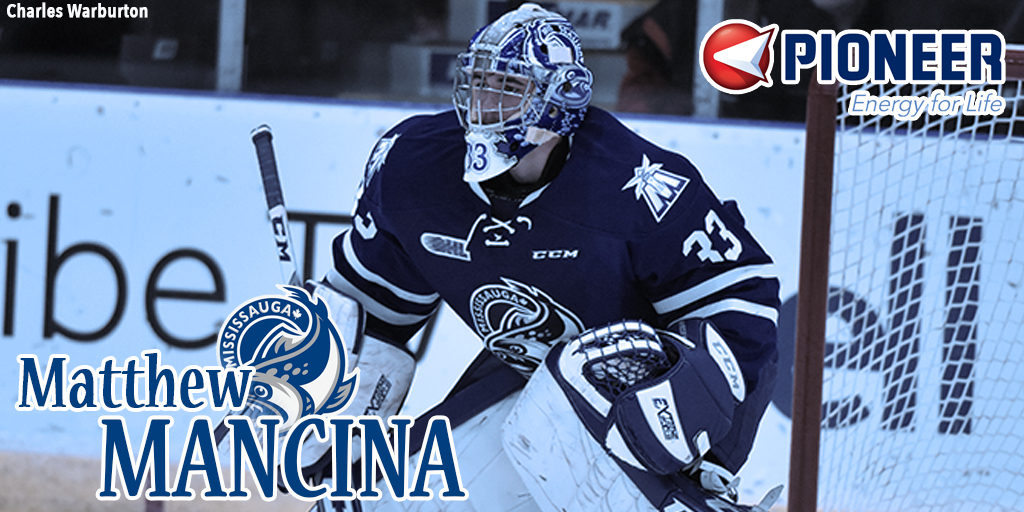 Toronto, ON – The Ontario Hockey League today announced that goaltender Matthew Mancina of the Mississauga Steelheads is the Pioneer Energy OHL Player of the Week for the playoff week ending April 23 after posting a 2-0 record including a shutout victory with a goals-against-average of 1.50 and save percentage of .944.

Mancina turned aside 51 shots last week for the Steelheads who opened the Eastern Conference Championship Series with a pair of road victories to take a 2-0 series lead against the Peterborough Petes.  In Game 1 on Thursday he made 27 saves in the 5-3 win, then recorded his first career playoff shutout stopping all 24 shots he faced in Game 2 on Saturday earning second star honours in the 3-0 triumph.  The victory improved the Steelheads’ perfect playoff road record to 8-0 and marked a sixth straight playoff win for the club and Mancina.

A 20-year-old from Tecumseh, Ont., Mancina is playing in his fourth OHL season but first with the Steelheads after being acquired from the Petes prior to the 2016-17 campaign.  So far this post-season he carries a 6-1 record with a goals-against-average of 2.44 and save percentage of .908.  Originally a third round choice of the Guelph Storm in the 2012 OHL Priority Selection, Mancina’s OHL tenure has included 157 regular season games including 76 victories between his three clubs.  The Steelheads have claimed Player of the Week honours in five of the last 11 weeks with other recipients including Spencer Watson, Jacob Ingham, and two-time winner Michael McLeod.

Watch video highlights of Mancina and the Steelheads in Game 1 and Game 2 against the Petes along with his post-game comments following Saturday’s win.

Also considered for the award this week was Chicago Blackhawks prospect Alex DeBrincat who recorded seven points in three games including three goals and four assists for the Erie Otters contributing to a Game 7 victory over the London Knights and a 1-1 series split in the Western Conference Championship Series against the Owen Sound Attack.  In addition, New Jersey Devils prospect and Steelheads captain Michael McLeod picked up four points including a goal and three assists in two games last week.