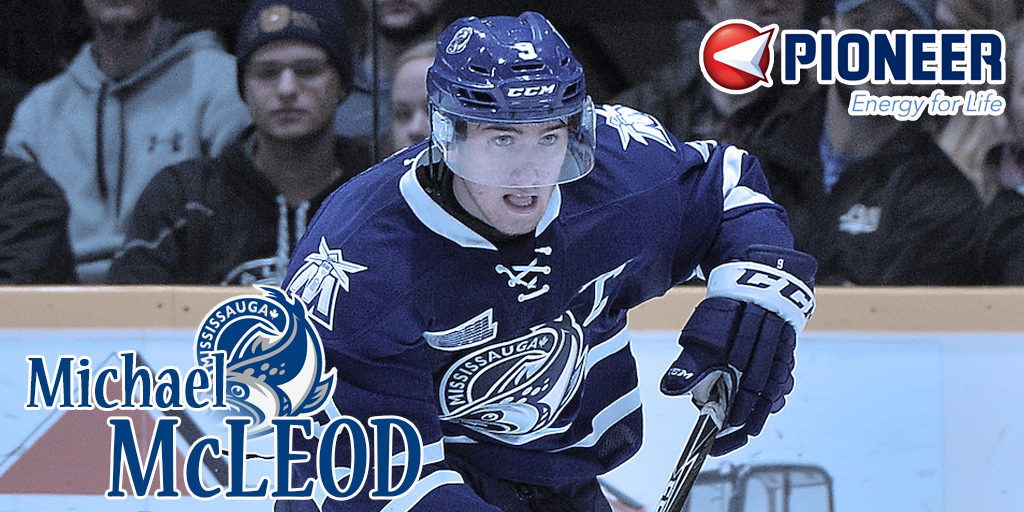 Toronto, ON – The Ontario Hockey League today announced that New Jersey Devils prospect Michael McLeod of the Mississauga Steelheads is the Pioneer Energy OHL Player of the Week for the playoff week ending April 2 recording nine points in four games including five goals and four assists along with a plus-minus rating of plus-6.

McLeod helped the Steelheads advance to the second round of the Eastern Conference OHL Playoffs with a six game series win over the Ottawa 67’s.  The series wrapped up on Sunday with McLeod delivering a team playoff record five-point performance scoring twice including the game-winner plus three assists as first star of the 5-1 road win.  The captain also had points in last week’s three other games including Game 3 on Tuesday with a goal in the 2-1 win, Game 4 on Thursday scoring the game-winner plus an assist in the 6-4 victory, and in Game 5 on Friday with a goal despite the 5-3 loss.  Central Division champion Mississauga will play in the Eastern Conference Semi-Finals for the first time since their Steelheads rebrand in 2012-13 facing off against the third place Oshawa Generals.

A 19-year-old from Mississauga, ON, McLeod is playing in his third season with the hometown Steelheads after being chosen fifth overall by the club in the 2014 OHL Priority Selection.  His first round playoff series included 11 points following a 2016-17 regular season campaign of 73 points in 57 games.  The first round pick of the Devils in the 2016 NHL Draft also earned Player of the Week honours in February and along with teammates Spencer Watson and Jacob Ingham have claimed the award for the Trout in four of the last eight weeks.

Watch video highlights of McLeod and the Steelheads against the 67’s in Game 3, Game 4, Game 5, Game 6.

Also considered for the award this week was Arizona Coyotes prospect Dylan Strome who scored four goals and three assists for seven points in two games for the Erie Otters who eliminated the Sarnia Sting in four straight first round games.  Petrus Palmu of the Owen Sound Attack also scored four goals and three assists for a total of seven points in three games last week helping his club move past the Kitchener Rangers in their five game series.  In goal, Joseph Raaymakers of the Sault Ste. Marie Greyhounds stopped 82 shots in the final three games of their first round matchup against the Flint Firebirds posting a goals-against-average of 1.33 and save percentage of .953 earning three straight wins to close the series in five games.