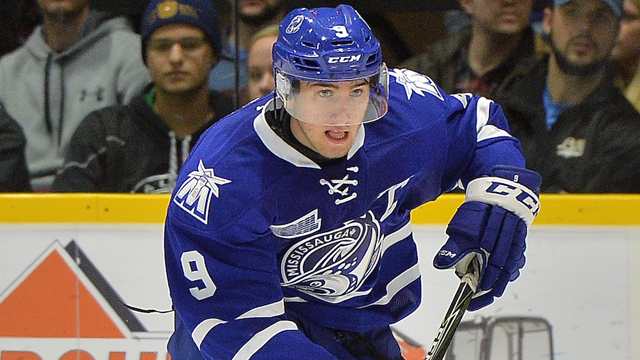 Toronto, ON – The Canadian Hockey League today announced that New Jersey Devils prospect Michael McLeod of the Mississauga Steelheads is the CHL Player of the Week for the week ending February 26 with 11 points in three games scoring five goals and six assists with a plus-minus rating of plus-8.

McLeod’s trio of multi-point performances last week helped clinch a berth in the 2017 OHL Playoffs for the Steelheads who currently lead the league’s Central Division with a 27-19-6-7 record.  His week began on the holiday Monday producing two assists in a 5-3 afternoon win over the Owen Sound Attack, and continued Friday with a career-high six-point effort in a 10-1 win over the Peterborough Petes.  In that contest, the captain tallied his second hat-trick of the season plus three assists earning first star honours and setting a new Steelheads single game points record.  His week wrapped up Saturday with two goals and an assist as second star of a 6-2 win over division rivals the Sudbury Wolves.

A 19-year-old from Mississauga, ON, McLeod was originally chosen by his hometown Steelheads fifth overall in the 2014 OHL Priority Selection.  The third year forward was a first round pick of the Devils in the 2016 NHL Draft and was a member of Canada’s National Junior Team in the 2017 IIHF World Junior Championship.  He’s already matched his career-highs in all offensive categories with 21 goals and 40 assists for 61 points in 48 games.