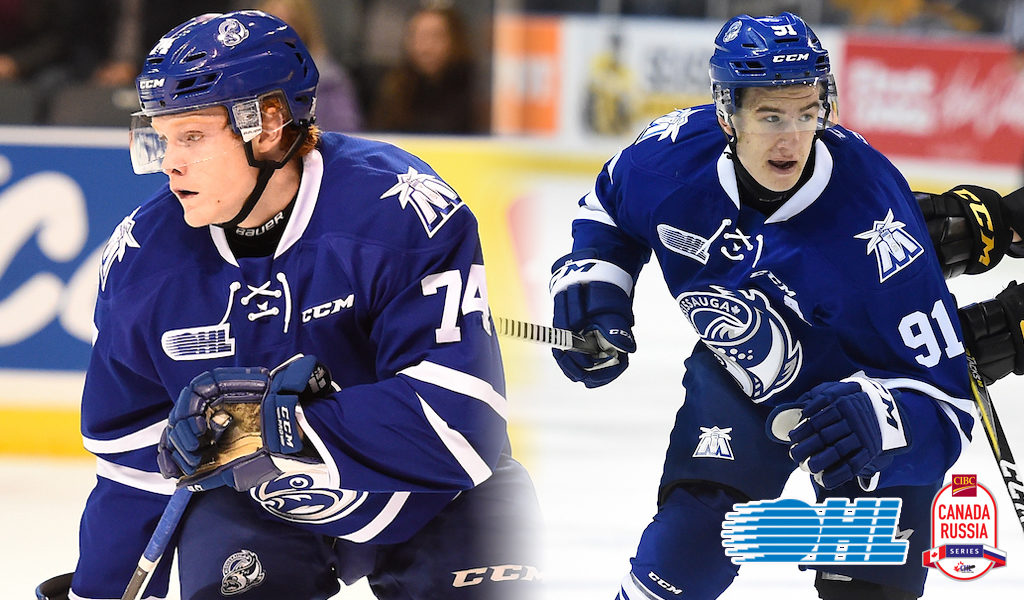 Toronto, ON – The Ontario Hockey League, in association with the Canadian Hockey League, today announced that forwards Owen Tippett and Ryan McLeod of the Mississauga Steelheads have been added to Team OHL’s roster for Game 3 of the 2017 CIBC Canada Russia Series, scheduled for Thursday November 9 in Owen Sound.

The Steelheads pair replace forwards Jonah Gadjovich of the Owen Sound Attack and Givani Smith of the Guelph Storm both unable to compete due to injury.

Thursday will mark Tippett’s first game in an OHL sweater this season since returning from the NHL’s Florida Panthers on Monday.  The 18-year-old from Peterborough skated in seven NHL contests with the Panthers who selected him 10th overall in the 2017 NHL Draft.  He made his NHL debut on October 17th in Philadelphia and scored his first career NHL goal on October 26th against the Anaheim Ducks.  Last season in Mississauga he scored 44 goals, the most in all-time franchise history since 2006, adding 31 assists for 75 points in 60 games.  As a member of Team OHL last November, Tippett earned Player of the Game honours in North Bay recording two assists in a 4-3 loss to Team Russia.

McLeod, an 18-year-old from Mississauga, is a top rated prospect for the 2018 NHL Draft competing in his first CIBC Canada Russia Series for Team OHL.  He is currently second on the Steelheads in scoring with six goals and 16 assists for 22 points through 17 games.  Ryan’s older brother Michael McLeod was a member of Canada’s National Junior Team last season and represented Team OHL in both 2016 and 2015 events.  Along with Tippett, McLeod joins fellow Steelheads in goaltender Jacob Ingham and defenceman Nicolas Hague competing Thursday night in Owen Sound.

The 2017 CIBC Canada Russia Series shifts to Ontario tied 3-3 in points following a pair of games in the Western Hockey League.  Team WHL won the opener by a 7-0 score in Moose Jaw on Monday, with Team Russia evening the series Tuesday with a 4-3 triumph in Swift Current.  Team OHL carries an all-time record of 23-4-1 in Canada Russia Series action.

All games of the 2017 CIBC Canada Russia Series will be available online through NeuLion’s CHL streaming platform at http://chl.neulion.com/chl/.

All games of the 2017 CIBC Canada Russia Series will also be broadcast on the NHL Network U.S the following day at 10:00 am Eastern.

The 2017 CIBC Canada Russia Series is supported by title sponsor CIBC, the Official Bank of the CHL, along with associate sponsors Cooper Tires and Sherwin-Williams.