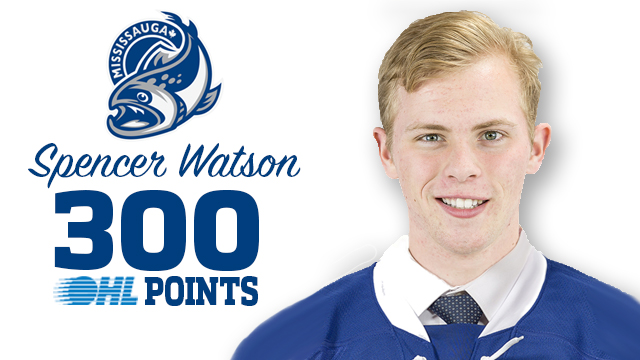 Watson registered a goal and an assist along with a team-leading nine shots on goal to bring his season point total to 52 including 28 goals and 24 assists in 40 games. The London, Ont. native has enjoyed considerable success in an injury-shortened campaign that was delayed due to offseason wrist surgery.

248 of Watson’s 300 career OHL points came with the Kingston Frontenacs, the team that drafted him in the second round of the 2012 OHL Priority Selection from the London Jr. Knights Minor Midgets.

Since joining the Steelheads in early December, Watson has helped the Trout claim their first Central Division title as they enter their final game of the 2016-17 season on Tuesday with wins in nine of their last 10 contests.

Watson is the third OHL player to reach the 300-point plateau this season, following in the footsteps of Erie Otters forwards Dylan Strome and Alex DeBrincat.

He was Los Angeles’ seventh round (209th overall) pick in the 2014 NHL Draft and signed an entry-level deal with the Kings in April 2016.