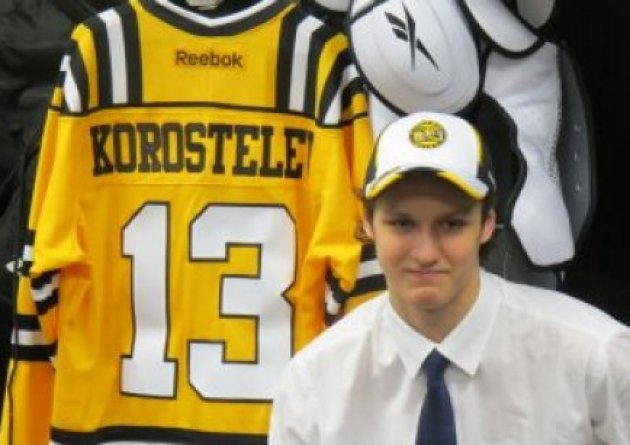 Sarnia, On – General Manager Jacques Beaulieu announced this afternoon that the club has agreed to terms with Nikita Korostelev on a Ontario Hockey League contract and education package.

Korostelev was the Sting’s 1st round pick (9th overall) in the 2013 OHL Priority Selection.

Earlier in April the Sting brought Korostelev to Sarnia to meet with staff and media.  At that time he expressed his excitement to play in Sarnia. “It was a dream of mine to play for the Sting in the OHL,” Korostelev said to the gathered media.

“Nikita is one of the most highly skilled players in the draft this year. There are times when he does things with the puck that you can’t believe he just did that and he leaves you shaking your head. Nikita has one of the top shots in the league and in every way, release, accuracy and speed and he is not shy to use his shot from anywhere on the ice. He always seems to get to loose pucks and create scoring chances for himself and his teammates. Although he is a goal scorer, Nikita also has the ability to make the players around him better by giving them the puck at the right times.”