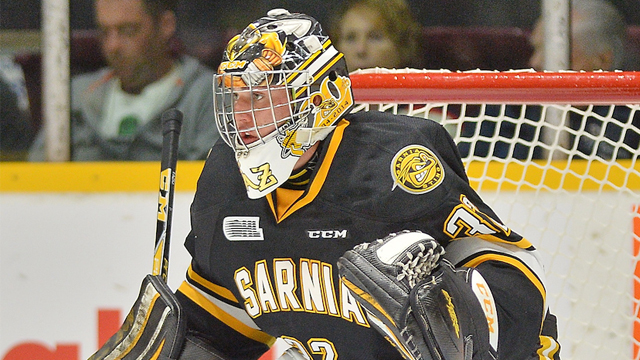 SARNIA 5 – ERIE 3
The Sarnia Sting put an end to the Erie Otters’ perfect run in regulation on home ice this season as goaltender Justin Fazio made 45 saves in a 5-3 decision. The Otters lose in regulation on home ice for the first time all season, failing to extend their division lead over second place London as Sarnia’s Kevin Spinozzi (13), Jordan Kyrou (30) and Anthony Salinitri (23) all had a goal and an assist. Jaden Lindo (19) and Drake Rymsha (29) also found the back of the net for Sarnia as the Sting maintain their seven point cushion on the final playoff spot in the Western Conference despite being outshot 48-14.. Kyrou extends his current point streak to 26 games, tying Jeremy Bracco’s 2016-17 season mark. Dylan Strome (20), Alex DeBrincat (58) and Taylor Raddysh (37) all scored for the Otters. DeBrincat has a goal in 16 straight games, three shy of Mike Ricci’s OHL record set in 1988-89.
GAME CENTRE

WINDSOR 4 – LONDON 1
The Windsor Spitfires were clearly the better team on Saturday, defeating the visiting London Knights 4-1 on Sportsnet as the Spits outshot London 38-22 and went 2-for-5 on the power play. Jeremy Bracco (23), Aaron Luchuk (24), Jalen Chatfield (8) and Julius Nattinen (9) all had Windsor goals while Gabriel Vilardi and Sean Day each registered a pair of assists. Mitchell Stephens (22) scored for the Knights as the Spits evened the season series at three wins apiece between the two clubs. Windsor remains four points back of fourth place Owen Sound for home ice in the first round of the OHL Playoffs. The Knights meanwhile, are four points back of first place Erie in the Midwest Division.
GAME CENTRE

OWEN SOUND 6 – GUELPH 5 – OT
The Guelph Storm gave the Owen Sound Attack all they could handle, but 2017 NHL Draft prospect Nick Suzuki (37, 38, 39) lifted the Bears to victory with three goals and an assist including the overtime winner. The thrilling 6-5 Owen Sound victory saw the two sides neck-and-neck on the scoreboard throughout the game as Guelph’s Givani Smith (23, 24, 25) netted a hat-trick of his own. Zachary Roberts (6), Kevin Hancock (28) and Cordell James (29) also had goals for the Attack in the win as Owen Sound outshot Guelph 41-26. Nate Schnarr (16) and Barrett Kirwin (5) joined Smith on the scoresheet for the Storm. The Attack have won five of the seven meetings between the two clubs this season with the season series wrapping up on March 19th in Guelph. The Attack are just one point behind second place London in the Midwest Division.
GAME CENTRE

MISSISSAUGA 4 – HAMILTON 3 – SO
The Hamilton Bulldogs outshot the Mississauga Steelheads 47-20, but sensational goaltending from rookie netminder Jacob Ingham made the difference in a 4-3 Steelheads shootout road win. Owen Tippett (40, 41) scored twice to become the first 40-goal scorer in Steelheads history and first in all-time franchise history since Justin Shugg (41) in 2010-11. Spencer Watson (25) also scored for Mississauga before potting the shootout winner. Ingham made 44 saves on the night before turning away all three shootout opponents he faced. The Bulldogs had goals from Michael Cramarossa (19), MacKenzie Entwistle (12) and Connor Roberts (8). The Steelheads have now won five straight games and clinch their first Central Division title in team history. Their last Central Division regular season crown in all-time franchise history came as the Mississauga St. Michael’s Majors in 2011. Hamilton sits two points back of fourth place Kingston in the race for home ice advantage in the first round.
GAME CENTRE

SAGINAW 5 – SUDBURY 2
Overage veteran Hayden Hodgson (34, 35) scored twice while rookie netminder Cameron Lamour earned his first OHL win as the Saginaw Spirit topped the visiting Sudbury Wolves 5-2. Keaton Middleton (4), Mike Davies (5) and Max Grondin (6) also scored while veteran forward Matthew Kreis logged three assists as the Spirit won their second straight game. Ryan Valentini (19) and Macauley Carson (26) scored for the Wolves, who suffered their third straight loss. The Spirit sit seven points out of the playoff picture in the Western Conference while the Wolves are trying to fend off seventh place Ottawa as the 67’s are just one point behind in the Eastern Conference.
GAME CENTRE

OTTAWA 4 – KINGSTON 3
Crafty centreman Mathieu Foget (6) got in on every goal, helping lead the Ottawa 67’s back from a 3-0 deficit to score four unanswered goals in a 4-3 triumph over visiting Kingston. Foget had a goal and three assists while rookie blueliner Peter Stratis’ (1) first OHL goal stood as the game winner, helping the 67’s get back in the win column. Leo Lazarev made 33 saves in goal as the 67’s were outshot 36-20. Kingston managed to go 3-for-4 on the power play in the loss, getting a goal and an assist from Jason Robertson (37) while Ted Nichol (14) and Cody Caron (8) also capitalized. With the win, Ottawa is hot on the heels of sixth place Sudbury in the Eastern Conference, trailing the Wolves by just one point.
GAME CENTRE

PETERBOROUGH 6 – BARRIE 3
Dylan Wells kicked aside 39 shots as the Peterborough Petes used contributions from a range of different sources in a 6-3 home ice win over Barrie. The Petes jumped out to a 3-0 lead on goals from Matthew Timms (10), Steven Lorentz (27) and Matt Spencer (7). Matyas Svoboda (8), Jonathan Ang (26) and Zach Gallant (18) would later add goals for the Petes while former Colts draft pick Tyler Rollo earned first star honours with a pair of assists. The Colts managed to outshoot the Petes 42-32, getting goals from Kirill Nizhnikov (9, 10) and Anthony Stefano (21). The Petes have won four straight games and are inching closer to their first East Division title since 2006, holding a six point lead over second place Oshawa.
GAME CENTRE

OSHAWA 5 – FLINT 2
Veteran captain Joe Manchurek (11, 12) scored twice while Jack Studnicka netted three assists in a 5-2 Oshawa Generals road win in Flint. Matt Brassard’s (11) goal with one second remaining in the second period opened the floodgates for Oshawa as the Generals came out in the third to score three times and seal the deal. Mason Kohn (10) and Domenic Commisso (18) also scored for Oshawa while Kyle Keyser made 30 saves against his former club. Kole Sherwood (33) and Jack Phibbs (2) accounted for Firebirds goals as Flint saw a three-game winning streak come to an end. The Firebirds trail sixth place Kitchener by three points in the Western Conference, while the eighth place Sarnia Sting drew to within five points as a result of their win in Erie.
GAME CENTRE