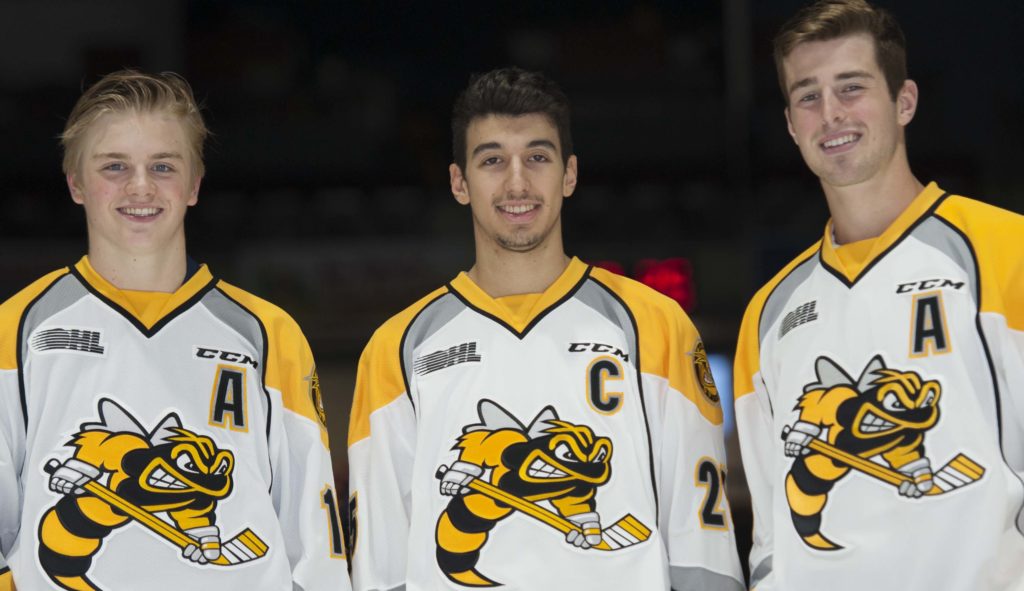 Sarnia, ON – Sarnia Sting management and coaching staff announced today that 19-year-old forward Jordan Kyrou will be named team captain for the 2017-18 Sting campaign. Heading into his fourth season with the Sting, Kyrou has suited up for a combined 194 games for Sarnia, tallying 60 goals and 181 points.

After being selected in the second round by the St. Louis Blues in the 2016 National Hockey League Entry Draft, the Toronto, ON native had an outstanding 94 points, ranking sixth in OHL scoring league-wide. Kyrou has also won a gold medal for Canada in the 2016 Ivan Hlinka Memorial Tournament, and is expected to compete for a role on Team Canada at the 2018 World Junior Championship in Buffalo, New York.

Head Coach Derian Hatcher comments “We are fortunate to have a number of leaders in our room, regardless if they wear a letter or not.  However, Jordan is a player who has gained a lot of experience both in the Ontario Hockey League but also has spent time in the American Hockey League at the end of last season and in this preseason in the National Hockey League with the St. Louis Blues.  We are looking forward to him bringing those experiences into our room and most importantly leading by example on the ice.  He is an elite player in our league and also a much respected player in our dressing room.”

Schlichting, originally drafted by the Sting in the third round of the 2013 Ontario Hockey League Priority Selection enters his fifth season in the OHL, all of them spent with Sarnia. Schlichting has dealt with his share of injuries through the course of his five years in Sarnia but is healthy and enters his overage season as a strong leader on the Sting blueline. The Newmarket, ON native is having a great start to the season and will play a major role in the Sting’s defensive core this season.

Rymsha is entering his fourth Ontario Hockey League season, his first full season with the Sarnia Sting. The Huntington Woods, MI native was acquired from the Ottawa 67’s ahead of last season’s 2017 trade deadline. Rymsha originally entered the league with London, and played his full rookie season as a member of the Knights. Having finished last season with the Sting, Rymsha had a very strong end to the year. After the January 7th trade, Rymsha scored 20 goals and 33 points in just 28 games for Sarnia. He was selected in the fifth round by the Los Angles Kings in the 2017 NHL Entry Draft.

Derian Hatcher adds: “Both Connor and Drake much like Jordan bring a ton of experience in our league to our leadership group.  Connor is a player who battled through injury problems early in his OHL career but we’re thrilled to have him healthy and a big part of this hockey club.  He is a great example for our players both on and off the ice.  Drake came to us at the deadline last year and immediately added some life into our room and our team.  He loves to play the game and it rubs off on everyone else around him.”