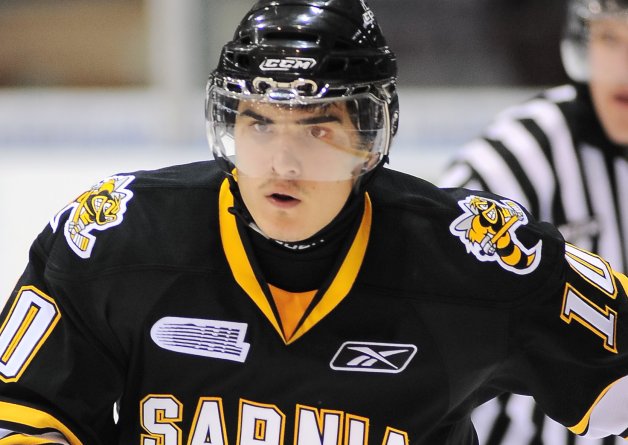 Toronto, ON – The Ontario Hockey League today announced that Sarnia Sting forward Nail Yakupov is the OHL Player of the Week for the week ending October 16 after leading the league with 12 points in four games scoring two goals with 10 assists and posting an impressive plus-minus rating of plus-8.

Yakupov led the Sting to four straight wins beginning on Monday in a 4-3 overtime win over the Windsor Spitfires where he recorded three assists.  He matched a career-high on Friday night with four assists and was named third star of a 7-2 win over the Saginaw Spirit before claiming second star honours on Saturday with a goal and two assists in a 5-4 overtime win over the Plymouth Whalers.  His week wrapped up on Sunday scoring once and adding an assist in a 4-3 win over the London Knights.

Yakupov, an 18-year-old Russian native of Nizhnekamsk, is playing in his second OHL season with the Sting and was named the OHL and CHL Rookie of the Year last season.  The 2012 NHL Entry Draft prospect currently leads the OHL in scoring with 25 points in 10 games with seven goals and a league-high 18 assists.

Also considered for the award this week was Yakupov`s teammate and New Jersey Devils prospect Reid Boucher who picked up nine points in four games scoring five goals and four assists, and Brett Findlay of the Sault Ste. Marie Greyhounds who scored three goals and five assists for eight points in three games.  In goal, Keegan Wilson of the Brampton Battalion went 1-0-1-0 with an impressive goals-against-average of 0.98 and save percentage of .963.