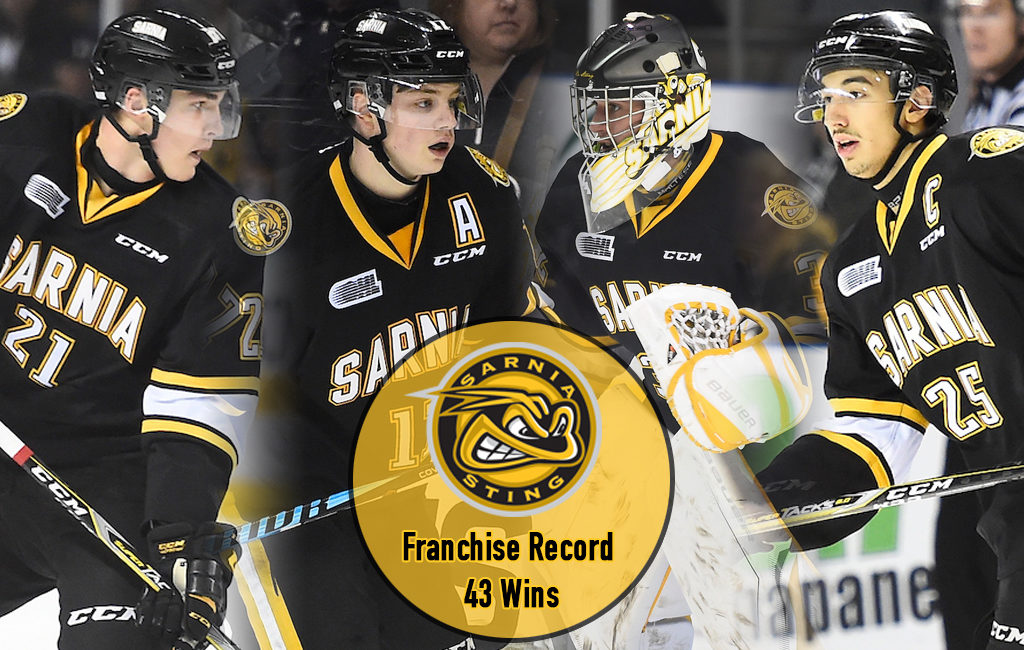 The Sting came back to stun the visiting Owen Sound Attack 5-4, buzzing back from a 4-2 deficit as Jordan Ernst tied things up on the power play with 48 seconds left in the third period before Jonathan Ang set up Kyrou for the game winner just 17 seconds into the extra frame.

We have now set the team record for wins in a season with 43! What a year it’s been, and there’s so much more to come!#SwarmWithUs pic.twitter.com/yroZpYhCIh

The victory sets a new benchmark covering seasons all the way back to the franchise’s inception as the Cornwall Royals back in 1981.  The 43 wins best the 2015-16 total of 42 with a team that included six members of the current roster. It marks the franchise’s third 40-win campaign joined by a 41-win season in 2002-03.

The Sting will finish second in the West Division, currently boasting a 43-15-3-1 record with 91 points. They’re also second in league goals for and feature the OHL’s top penalty kill at 88.2%, over four percent higher than the second-best Kingston Frontenacs.

The memorable season has included the jersey retirement of franchise great Steven Stamkos on Jan. 12th along with a number of individual accolades. Kyrou became the franchise’s all-time leader in career assists on Dec. 9th while goaltender Justin Fazio leads the club in career wins and games played as well as single season victories.

The Sting have qualified for the OHL Playoffs for a fourth straight season and are seeking the franchise’s first ever OHL Championship. They’re in the hunt for their first playoff series victory since 2008.