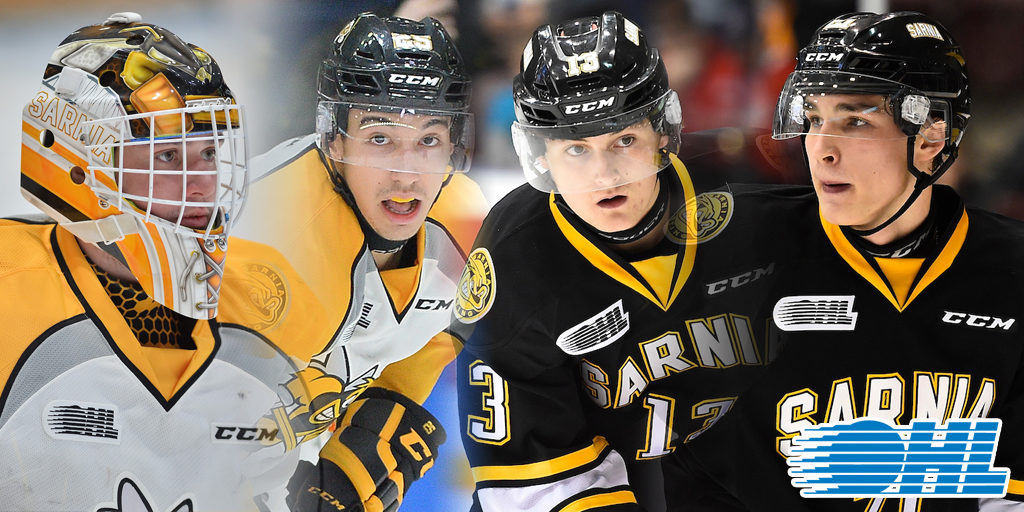 Off to their best start in club history, the Sarnia Sting are showing no signs of slowing down.

Derian Hatcher’s club has buzzed out of the gate to an OHL-best 9-1-0-0 record, riding a wave of momentum that led to a team record eighth straight win on Sunday as OHL ‘On the Run’ Player of the Week Brady Hinz had a pair of goals in a 3-2 win over the Windsor Spitfires.

The Sting had won seven consecutive games twice in past seasons, doing so from October 1st to 16th, 2011 as well as from January 22nd to February 6th, 2004. They entered last weekend ranked eighth in the CHL’s weekly Top 10 Rankings, a figure that’s sure to climb when a new list comes out on Wednesday afternoon.

Sarnia has been dominant, scoring a league leading 51 goals while surrendering a league low 25 thanks to the fine goaltending of overage veteran Justin Fazio and sidekick Aidan Hughes.

Player of the Week @BradyHinz had a first star effort Sunday with 2️⃣?➕1️⃣? lifting ? to 1️⃣st overall. pic.twitter.com/q0MinFVb4e

Defensively, 19-year-old Theo Calvas leads the OHL with a plus-16 plus/minus rating. He’s been joined by overage veteran Connor Schlichting, and 18-year-olds Nick Grima and Kelton Hatcher in logging big minutes on the back end. Rookie defender Colton Kammerer has also impressed and was named to Canada’s National Under-17 team roster on Tuesday.

Offensively it’s been all hands on deck as Calgary Flames prospect Adam Ruzicka has been a factor with each shift he takes, recording 15 points (8-7–15) over 10 games while leading the team with 43 shots on goal. St. Louis Blues prospect Jordan Kyrou enjoyed an extended look from the NHL club before returning to put up 14 points (4-10–14) over eight contests. Hinz, Philadelphia Flyers pick Anthony Salinitri, veteran utility man Jordan Ernst and Los Angeles Kings draftee Drake Rymsha have also produced at over a point-per-game to this point.

All that scoring has resulted in Sarnia lighting the lamp at least six times in six of 10 contests.

The Sting have played seven of their 10 games from the comforts of home this season but the club will be tested this weekend as they hit the road for three-in-three beginning Thursday in North Bay. They’ll also visit Sudbury on Friday before rounding out the trip in Barrie on Saturday.