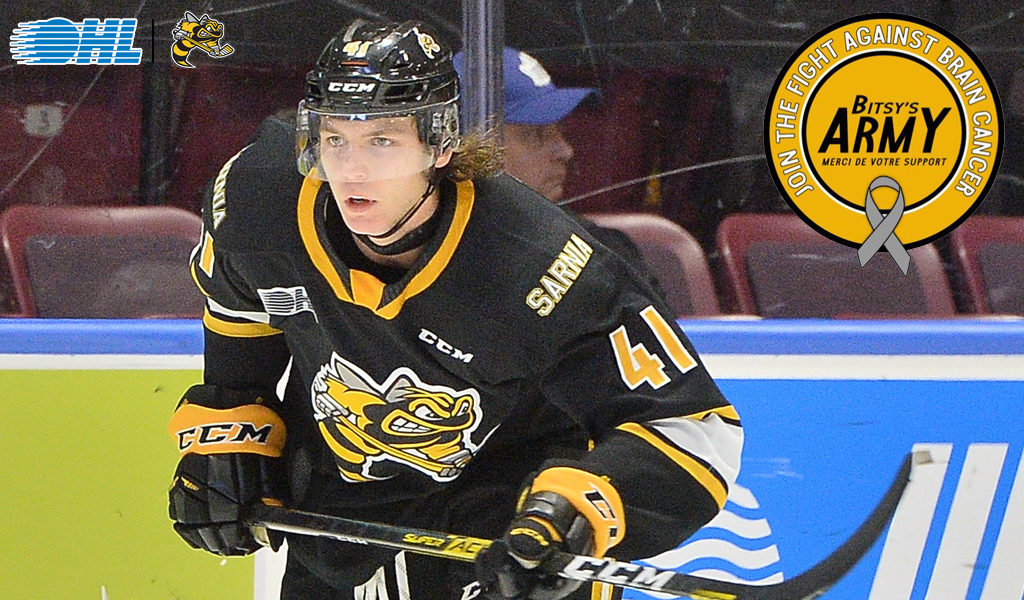 From trips to the always-too-cold minor hockey rinks as a child to rounds of golf together as adults and all the laughs in between, Piche has always been there for his younger cousin.

A former player himself, the 31-year-old has followed Bitten’s hockey career closer than anyone. A native of Montreal, he’d make the two-hour trip to the capital city to watch Bitten play for his hometown Ottawa 67’s during the three seasons he was there. Sarnia may be a bit further away, but Piche is always sure to text him after every game.

“There’s actually a story that not many people know: I went to Dallas for the NHL Draft and ended up not getting drafted and he was the first person to text me,” said Bitten over the phone from his Ottawa home. “That’s what I think of when I think of my cousin.”

Seven years ago, Piche was diagnosed with brain cancer. The past year, Bitten said, has been especially tough.

“The last time we played golf together was the last time he was able to play,” Bitten recalled. “It was crazy because he was alright then. Obviously he had his moments where had bad days and good days, but it dipped pretty hard. It’s crazy what cancer does to you. It attacked him pretty quick.”

After years of being by his side every step of the way, Bitten wanted to do something to show his cousin that he’s doing the same for him.

When the Sting launched their Pay It Forward Challenge last month – encouraging all players and staff to share some positivity within the community – it proved to be perfect timing to launch the initiative. Bitten, however, has had his idea brewing since April, following the end of the 2019-20 season.

“This was from the heart,” Bitten continued. “I really wanted to do this. I really wanted to help him, support him, and let people know I’m here with him. It’s tough for people battling cancer – not just him, but everyone – with the virus going on. I wish I could be there with him more. I went to visit him once and that was a fantastic time, but I wish I could do it more.”

For his #StingPayitForward challenge, @SamBitten14 is launching @bitsys_army to raise awareness and funds for the @BrainTumourFdn of Canada, in support of his cousin Martin Piché. ❤️

It all starts with a huge auction that kicks off TOMORROW NIGHT! 🔥 pic.twitter.com/4lWVkllF6X

With the help of Spencer Loeb, the Sting’s graphic designer, and Jake Bourrie, Director of Marketing & Corporate Partnerships, Bitten’s idea was brought to life. With the announcement of the initiative came the announcement of an online auction with all proceeds directly benefiting the Brain Tumour Foundation of Canada. Items up for auction include jerseys and other memorabilia warn and signed by Bitten himself; his brother, former OHLer and current Iowa Wild forward, Will; and other current and former Sting players including Jamieson Rees, Jacob Perreault and Travis Konecny.

Since launching on Dec. 2, reception has been excellent.

“I’m so happy that people want to donate and want to help any way they can. It’s been fantastic and it really touched my cousin that I did this,” Bitten said of the response he’s received. “When I launched it and he saw it on the internet, it brought tears to his eyes. We all know Martin is so unselfish and is one of the nicest guys you’ll ever meet, so we were happy to do that for him and give him a reason to keep fighting and push through it.”

Get your hands on some great items just in time for Christmas!

As Bitten prepares for his fifth and final OHL season, he spoke to the visions he has for taking Bitsy’s Army even further.

“I want to do a pledge where for every goal I score, I would have a list of people willing to donate 5-10 dollars. In my head, I have a vision that the list will be filled with 500 people,” Bitten explained. “I would have my family members and friends on board and I already have 100 people who are in. That’s my main vision.”

As an older player with access to resources and an audience, it’s always been important for Bitten to be able to give back to the community in some capacity.

“A lot of players don’t realize how big of an impact we can make, but playing in a small town, you can see how excited people are to see us. You never know what someone’s going through so I always try to make time for people,” said Bitten. “That’s what makes the game fun for me.”

But giving back to the person who has always been there for him, especially during these troubling times, is now more important to him than ever.

“He’s an unselfish person. He’s there for me first. He’s a warrior and he’s really battling,” said Bitten. “I love him so much.”

Click here to bid on auction items that will support the Brain Tumour Foundation of Canada. For more information on Bitsy’s Army, visit sarniasting.com.