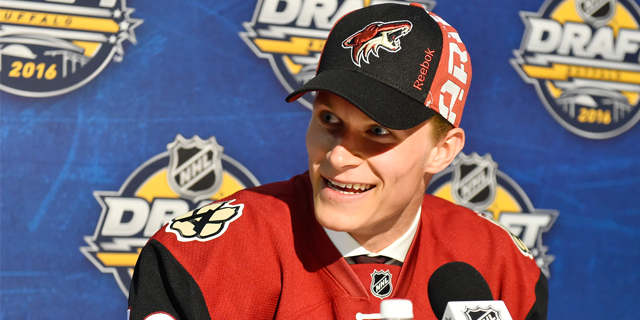 GLENDALE, AZ – Arizona Coyotes General Manager John Chayka announced today that the Coyotes have signed defenseman Jakob Chychrun to an entry-level contract. As per club policy, terms of the contract were not disclosed.

“We are very pleased to sign Jakob to an entry-level contract,” said Chayka. “Jakob is a highly-skilled player with an all-around game. He has a great work ethic and is very determined. We look forward to watching him continue to develop this season.”

Last season, the 6-foot-2, 210-pound Chychrun registered 11-38-49 with 51 penalty minutes (PIM) in 62 games with the Sarnia Sting (OHL). Chychrun led all Sting defensemen and ranked fourth among OHL blueliners. In two seasons with Sarnia, Chychrun has totaled 27-55-82 in 104 career games.

“It’s an honor to sign with the Coyotes,” said Chychrun. “I’m the first to understand that there’s still a lot of work ahead of me but this is an absolute dream come true to sign my first NHL contract.”

The 18-year-old native of Boca Raton, Florida was an OHL First Team All-Rookie in 2014-15 and played in the CHL Top Prospects Game last year. He was also named to the OHL Second All-Star Team. Chychrun played with Canada at the U-18 World Junior Championship and recorded 1-3-4 in seven games.

The Coyotes selected Chychrun in the first round (16th overall) of the 2016 NHL Entry Draft.