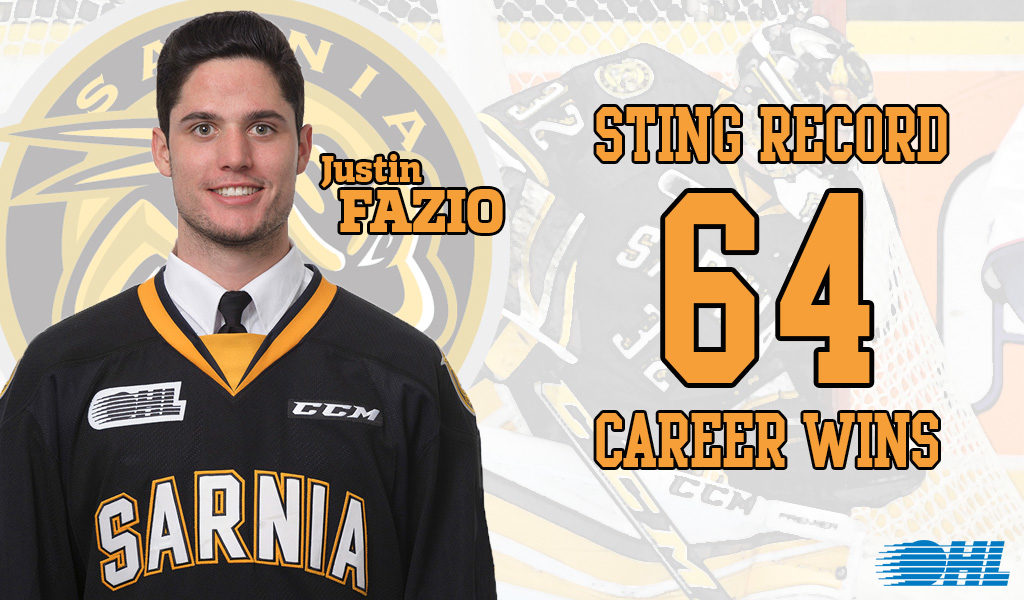 The 20-year-old hometown product of Sarnia, Ont. turned aside 37 shots in a Sting franchise record 11th consecutive win in Barrie on Friday, coming out on top by a score of 7-2.

The 6-foot-1, 189Ib. Fazio was Sarnia’s fourth round pick in the 2013 OHL Priority Selection from the Elgin-Middlesex Chiefs Minor Midgets. He improves to 9-1-0-0 on the season with a 2.40 goals-against average and a .931 save percentage over 10 contests.

Up next in the Sting franchise record books, Fazio closes in on Robert Gherson‘s club mark of 147 career regular season games played. Fazio wraps up the weekend with 135 to his credit.

After entering the weekend as the second-ranked club in the Canadian Hockey League this week, the Sting proceeded to take wins in North Bay, Sudbury and Barrie. A big West Division showdown with the Sault Ste. Marie Greyhounds awaits them back at home on Friday.

On a night of milestones, add one more! @JustinFazio97 ties Pat DesRochers all time #Sting franchise record in wins at 63! #1More pic.twitter.com/JhEubLJ4VL