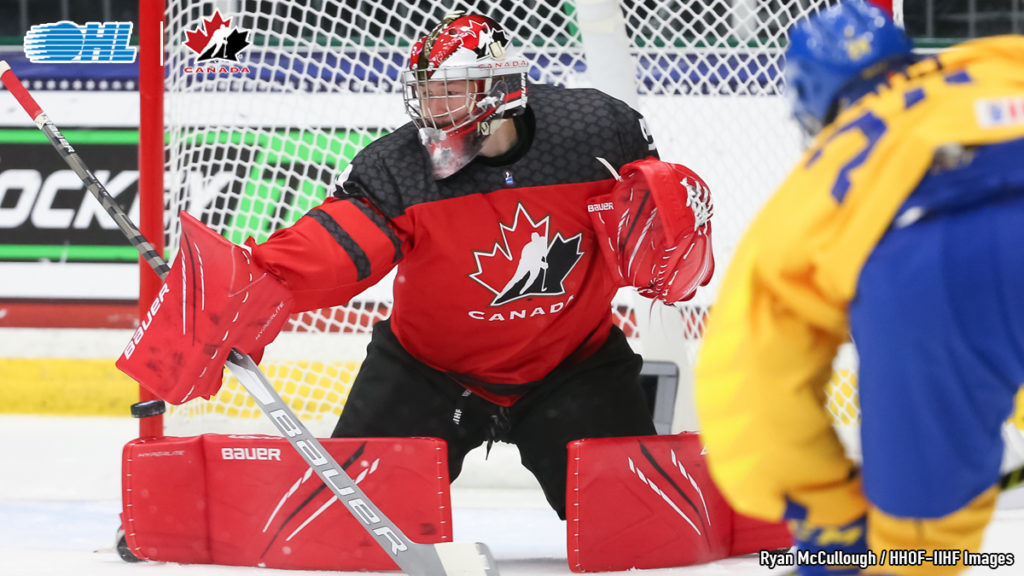 One of the OHL’s rising goaltending stars has been recognized for his fine play in Texas, helping Canada’s National Under-18 Team capture gold for the first time since 2013.

Sarnia Sting netminder Ben Gaudreau was awarded Top Goaltender honours at the 2021 IIHF World Under-18 Hockey Championship, a distinction annually handed down by the IIHF Directorate.

Gaudreau backstopped Canada to five of its seven victories in the tournament, posting an event-leading 2.20 goals-against average and .919 save percentage in the process. He turned aside 31 shots in Thursday’s 5-3 gold medal victory over Russia.

“Ben (Gaudreau) and Thomas Milic went head-to-head to see who was going to be number one,” said Canadian head coach Dave Barr following Thursday’s win. “We just picked Gaudreau just because he was a hair better and he ended up playing just fantastic for us.”

Gaudreau joins past OHL company in Maksim Zhukov (Russia, 2017), John Gibson (USA, 2011), Jack Campbell (USA, 2010) and Josh Unice (USA, 2007), a quartet that won the award a season prior to suiting up in the Ontario Hockey League. Prior to Gaudreau, the last Canadian recipient was Acadie-Bathurst Titan netminder Mason McDonald, who earned the distinction in 2014.

A native of Corbeil, Ont., Gaudreau joined the Sting as the seventh overall pick of the 2019 OHL Priority Selection, playing to a 10-13-1-1 mark with a 4.34 goals-against average and .890 save percentage in his rookie season. He was a ‘B’ rated prospect for the 2021 NHL Draft on NHL Central Scouting’s latest ‘Players to Watch’ list.