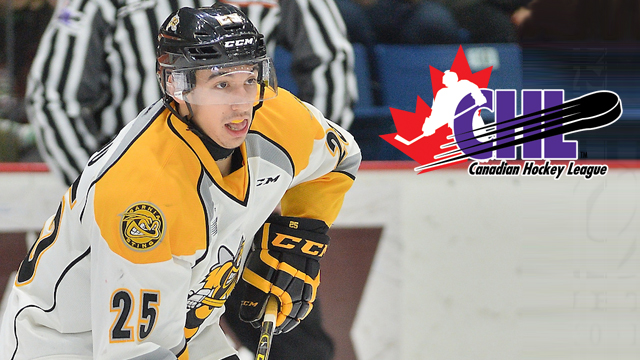 Toronto, ON – The Canadian Hockey League today announced that St. Louis Blues prospect Jordan Kyrou of the Sarnia Sting is the CHL Player of the Week for the week ending February 25 after recording 13 points in four games including five goals and eight assists with a plus-minus rating of plus-7.

Kyrou earns the national honour for the second time this season in a week highlighted by a career-high seven point performance.  The first star achievement came on Sunday in a 9-0 win over the Flint Firebirds and featured four goals and three assists tying a Sting single game record which put the captain into a tie atop the OHL’s scoring race with 99 points.  Kyrou’s week also included a goal and an assist on Monday where he was named second star of a 6-1 win over the Saginaw Spirit, and a four-assist effort on Friday as first star of a 6-2 win over the Firebirds.  He was held off the scoresheet on Saturday in a 2-1 loss to the Erie Otters.  The Sting have been a staple in the CHL’s Top-10 Rankings for the majority of the season and enter this week’s action 42-14-4-0 which is just one win shy of a new franchise record.

A 19-year-old from Toronto, Ont., Kyrou is playing in his fourth career season with the Sting who chose him in the second round of the 2014 OHL Priority Selection.  His 99 points represent a new career-high and include 35 goals and 64 assists in just 49 games played for an impressive 2.02 point-per-game average.  Kyrou was a second round pick by the Blues in the 2016 NHL Draft and helped Canada win gold at the 2018 IIHF World Junior Championship in Buffalo.

Also considered for the award this week was 2018 NHL Draft prospect Ty Smith who scored three goals and seven assists for 10 points in four games including a Spokane Chiefs record for points by a defenceman with a seven point performance, and Calgary Flames prospect D’Artagnan Joly of the Baie-Comeau Drakkar who scored five goals and four assists for nine points in three games. 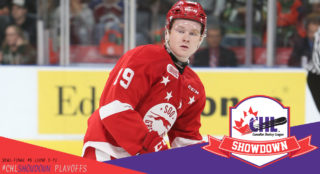