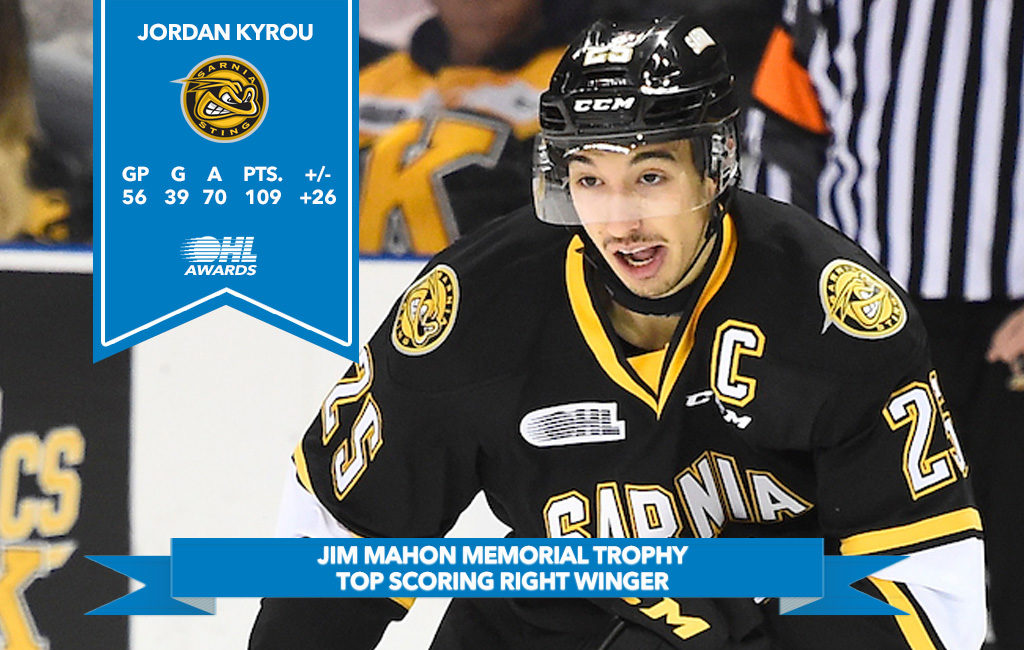 Jordan Kyrou finished third in OHL scoring but led all right wingers with 109 points including 39 goals and 70 assists in just 56 games to earn the Jim Mahon Memorial Trophy which is one of two regular season league awards recognizing offensive performance based on statistics.

The 19-year-old from Toronto, Ont., was the league’s first to reach the century mark for points reaching the milestone mark in his 50th game on February 27.  Kyrou also generated 31 multi-point performances and led the league with a 1.95 point-per-game mark.  He helped Canada win gold at the 2018 IIHF World Junior Championship and captained the Sarnia Sting to their best season in franchise history.

The 19-year-old from Toronto, Ont., has been a four-year member of the Sting where he was originally chosen in the second round of the 2014 OHL Priority Selection.  He played 250 career regular season games accumulating 290 points including 99 goals and 191 assists.  Kyrou was a second round pick of the St. Louis Blues in the 2016 NHL Draft.

The Jim Mahon Trophy was first presented following the 1971-72 season by the players and management of the Peterborough Petes in memory of their right winger Jim Mahon who was accidentally killed that summer.  Kyrou becomes Sarnia’s first recipient of the award and follows recent winners that include Alex DeBrincat of the Erie Otters in 2017, Kevin Labanc of the Barrie Colts in 2016, and Mitch Marner of the London Knights in 2015.