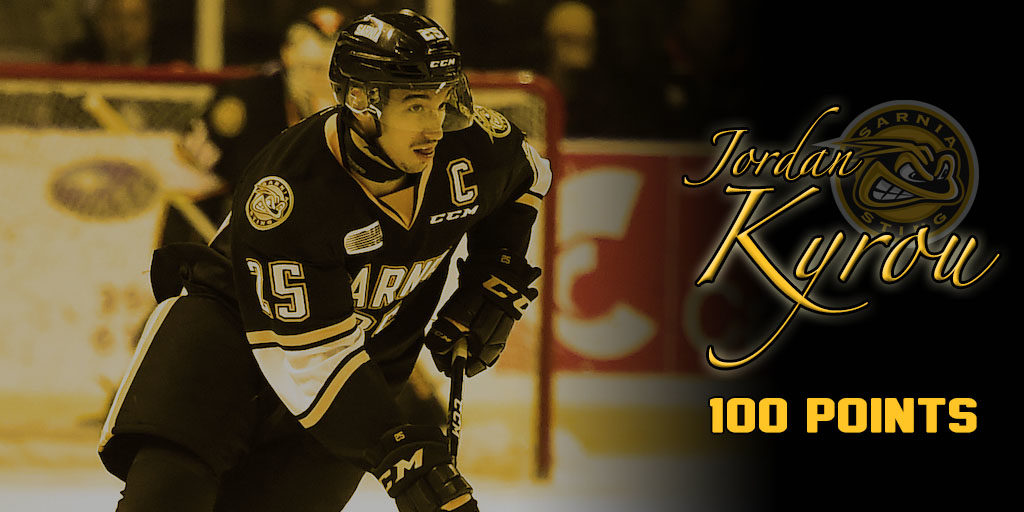 Sarnia Sting captain and reigning CHL and OHL ‘On the Run’ Player of the Week Jordan Kyrou became the league’s first 100-point scorer of the 2017-18 season on Tuesday in Kitchener.

The St. Louis Blues prospect had an assist in Sarnia’s 6-3 loss to the Kitchener Rangers to bring his season point total to 100 over 50 games played. That figure includes 35 goals and 65 assists to go with a plus/minus rating of plus-30.

Kyrou, who missed time away winning gold with Canada’s National Junior Team this past January in Buffalo, follows Travis Konecny (2015-16) as the 12th player in Sarnia Sting history to reach the century mark in points.

His assist on Tuesday follows a career performance on Sunday as Kyrou tied a Sting single game record with seven points (4-3–7) in a 9-0 win over the Flint Firebirds to vault him into a tie for the OHL scoring lead, a title he now holds sole possession of.

A World Junior gold medalist and Ivan Hlinka Memorial Tournament champion as a member of Team Canada, Kyrou has twice represented the OHL in the CIBC Canada-Russia Series and is Sarnia’s franchise leader in career assists with 186. He sits second in career points by a Sting player with 281 over 244 regular season contests.

Originally a second round pick by the Sting in the 2014 OHL Priority Selection from the Mississauga Senators Minor Midgets, Kyrou was St. Louis’ second round (35th overall) pick in the 2016 NHL Draft.