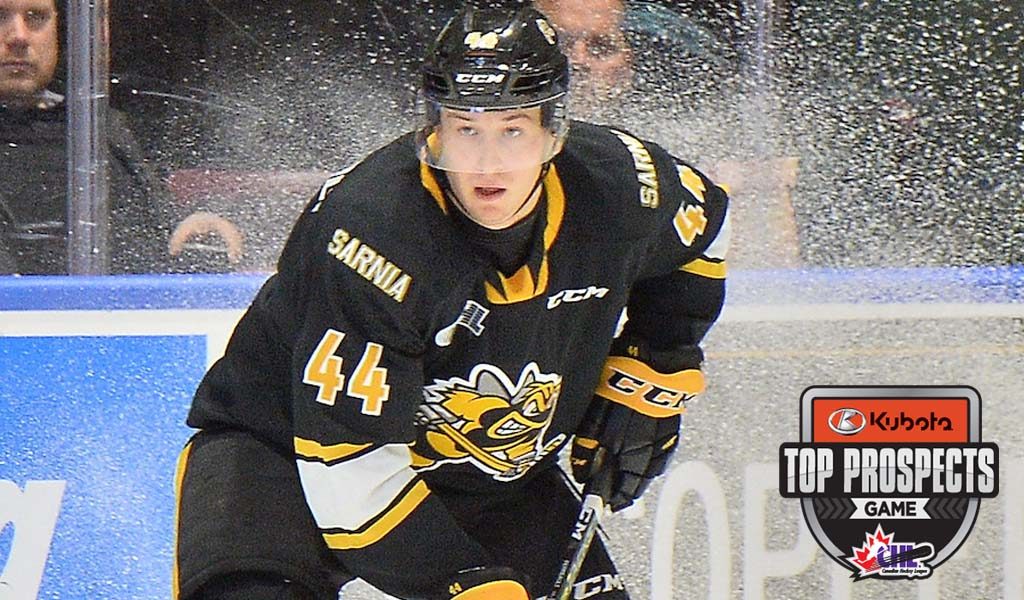 It’s amazing what kind of wisdom can be drawn from a combined 43 years of National Hockey League experience, just ask Sarnia Sting forward Jacob Perreault, who continues to benefit from a well-travelled trifecta of hockey influencers.

The son of long-time NHL faceoff specialist Yanic Perreault, Jacob also has the opportunity to play under coaches Derian Hatcher and David Legwand with the Sarnia Sting where he comes off a 30-goal rookie season and is well on his way to eclipsing that mark as a sophomore.

“Not everyone has the privilege of growing up with a dad who played in the NHL, but then I’ve also had the added experience of playing for my two coaches in Sarnia,” Perreault reflected. “When you take all three of those guys and listen to their advice, you learn a lot about the game and how to do things better.”

Owners of the Sting franchise since January 2015, Hatcher and Legwand, along with Sarnia general manager Nick Sinclair, selected Perreault with the 19th overall pick of the 2018 OHL Priority Selection. Sarnia had finished second overall in the OHL with 46 wins the year prior, and has been in somewhat of a rebuild in Perreault’s two seasons with the club.

A fleet-footed winger who was the 17th ranked North American skater on NHL Central Scouting’s recently released Midterm Draft Rankings, Perreault is in Hamilton, Ont. preparing to suit up for Team Red at the 2020 Kubota CHL/NHL Top Prospects Game. He follows in the footsteps of Sting teammate Jamieson Rees, who was selected 44th overall by the Carolina Hurricanes in June after competing at last year’s event in Red Deer, Alta.

Perreault, Rees and the Sting have had an up and down season in Sarnia, one that started slow with an 0-7 record out of the gate. Derian Hatcher’s club managed to rebound though, winning 10 of its next 11 games. Sarnia currently sits six points out of a playoff spot in a highly competitive Western Conference.

Individually, Perreault has been productive, building off last year’s campaign that saw him become the first Sting 16-year-old rookie to reach the 30-goal mark since Alex Galchenyuk in 2010-11. The 17-year-old has 26 goals, 25 assists and 51 points through 39 contests, producing at a 1.31 point-per-game clip. He leads the OHL with 11 power play goals.

As he’s learned, the game isn’t all offence. His dad’s gradual transformation from being one of the QMJHL’s top point producers over a three-year span with the Trois-Rivieres Draveurs from 1988-91 into a dependable, two-way NHL centreman is proof enough.

“He always told me that the small details are one of the main things that separate you from other players,” the younger Perreault noted. “I see his stats in junior but he transitioned into the next level and developed another dimension to his game. I think if I can focus on those little details it can make me a more effective player.”

#OHL leaders at the break:@noelhoefenmayer and @shane_wright51 at the top of their respective classes while @JPerreault_44 and @MoncadaLuke shine on special teams.

Father and son typically connect after every game, exchanging thoughts on how things went and what can be done moving forward, but it isn’t just today’s advice that has shaped Perreault as a player. A childhood full of memories around the game taught him valuable lessons.

“One of the guys I’ll always really appreciate is Patrick Lalime,” he mentioned. “He was always that guy that gave my brother and I attention after games. He’d come out and pretend to put his signature on our foreheads, fun stuff like that. It makes me want to be the guy that gives the kids that extra little bit of attention because it makes their day and I know they look up to guys like us.”

Guys like Perreault, who is one of several highly touted OHL forwards suiting up on Thursday in Hamilton. He’ll skate alongside Sudbury’s Quinton Byfield, Ottawa teammates Marco Rossi and Jack Quinn as well as Windsor Spitfires centre Jean-Luc Foudy on Team Red.

Catch Perreault and 16 other highly skilled OHL draft eligibles Thursday night at 7:00pm ET on Sportsnet and NHL Network when the puck drops on the 2020 Kubota CHL/NHL Top Prospects Game.