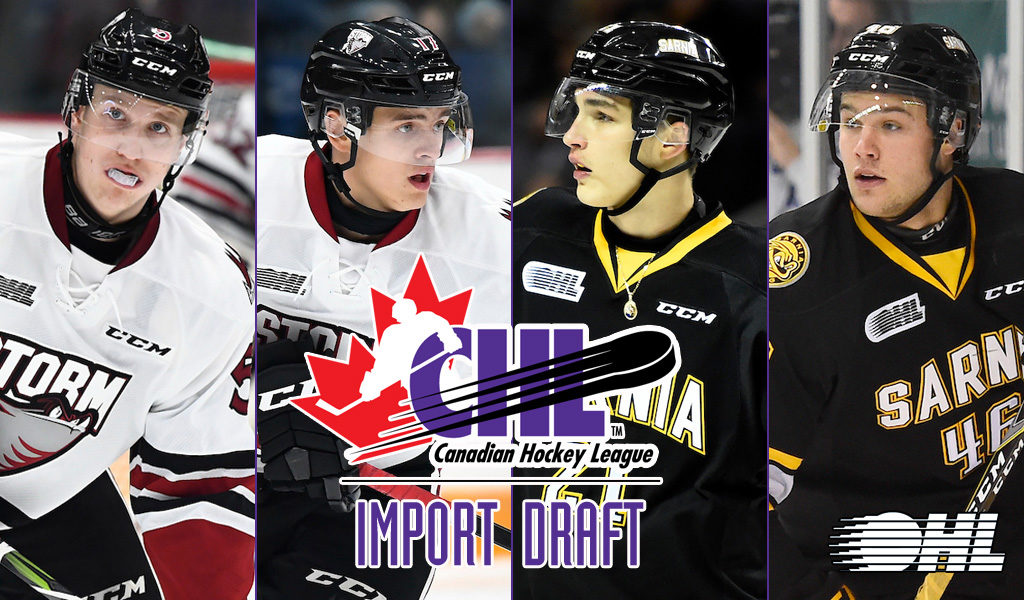 While the selections provide clubs the opportunity to bolster their lineups with new look world class talent in advance of next season, those faces expect to remain the same for the Guelph Storm and Sarnia Sting both content with the stars that presently occupy their import positions.

Those positions include forward Alexey Toropchenko and defenceman Dmitri Samorukov in Guelph, and forwards Adam Ruzicka and Hugo Leufvenius in Sarnia.

“We think they’re both two of the top import players, if not beyond that, as far as across the league goes,” Sting General Manager Nick Sinclair told Blackburn News reporter Josh Boyce. “We’re excited to have Hugo and Adam back for the 2018-19 season, and they’re going to be a big part of our team.”

Ruzicka has had a productive two-year term in Sarnia to date with 118 points in 124 games including 36 goals and 36 assists last season.  Chosen 107th overall in 2016, the Slovakian centre blossomed into a fourth round pick by the Calgary Flames in the 2017 NHL Draft and has twice represented his country on the World Junior stage.

WATCH THIS: @ARuzicka21 fires from left side, right side, and slot for his 1st #OHL 🎩🎩🎩@NHLFlames prospect equals career-high with 46 points as @StingHockey win 5️⃣th straight. pic.twitter.com/Xa9RLxnLyu

In his first OHL campaign, Sweden’s 19-year-old Leufvenius delivered 19 goals and 28 assists for 47 points in 68 games helping the Sting establish franchise records for wins with 46 and points with 97.  His play found a spot on NHL Central Scouting’s final rankings for the 2018 NHL Draft at number 167 among North American skaters.

The Storm return a number of veterans to the lineup in 2018-19 with Russians Toropchenko and Samorukov among them.

“Alexey possesses an intriguing combination of size, skating and excellent hockey sense,” Storm General Manager and Head Coach George Burnett said one year ago following the fourth overall selection. “ He is a powerful presence on the ice and we expect him to have an impact on our lineup this season.”

Toropchenko joined the Storm as a St. Louis Blues prospect chosen in the fourth round of the 2017 NHL Draft and scored 17 goals and 22 assists for 39 points in 66 games with an especially hot start recording eight points in his first four games.

Samorukov brings even more experience back to the Royal City having played two seasons since his second overall selection in 2016.  In 129 games, the third round pick of the Edmonton Oilers in 2017 has produced 54 points including 15 goals and represented his country at the 2018 IIHF World Junior Championship.

Talented import players can certainly help teams as they challenge for a championship.  The Hamilton Bulldogs benefited from the ability of Marian Studenic, a New Jersey Devils prospect, while the Sault Ste. Marie Greyhounds relied heavily on rearguard Rasmus Sandin who turned his rookie season into a first round selection by the Toronto Maple Leafs.  In 2017 it was Windsor’s Mikhail Sergachev and Erie’s Erik Cernak who logged big minutes on the blue line.

A total of eight NHL drafted players were among the 27 chosen by OHL teams on Thursday including the first three picks led by goaltender Ukko-Pekka Luukkonen, a Buffalo Sabres prospect, chosen third overall by the Sudbury Wolves.