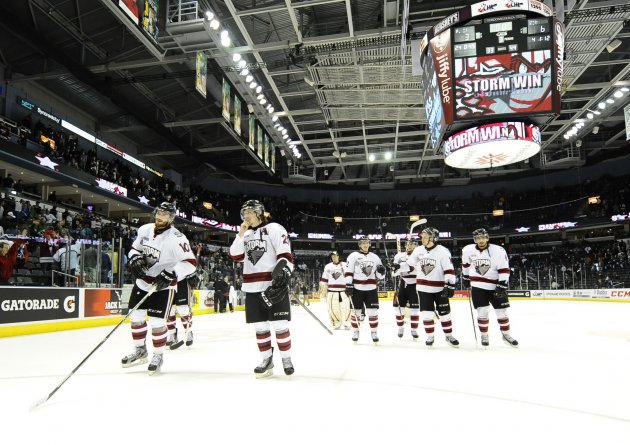 A three goal outburst in the first six minutes set the tone for the Guelph Storm as they beat the Val-d’Or Foreurs 6-3 in Game 4 of the 2014 MasterCard Memorial Cup at Budweiser Gardens, in London, ON.

With the victory, the OHL Champion Storm (2-0) have guaranteed a spot in Sunday’s Championship Final becoming the eighth team in the past 10 years to start a MasterCard Memorial Cup with two straight wins.

Columbus Blue Jackets draft pick Kerby Rychel opened the scoring for the Storm with his third goal of the tournament just 59 seconds into the contest with an easy tap in after receiving a nice pass from linemate Zack Mitchell.

“We have four lines that can play, can score, they’re responsible in both ends of the rink, so that’s been one of our strengths,” said Mitchell, who finished with three points and was the first star of the game.

Mitchell, a Minnesota Wild prospect, would join the scoring parade three minutes later as his wrist shot beat Foreurs goaltender Antoine Bibeau, putting the Storm up by two. Jason Dickinson would add one more for the Storm giving them a 3-0 lead to finish the first period.

The offensive outburst continued for the Storm into the second period as Pius Suter, Robby Fabbri, and Detroit Red Wings prospect, Tyler Bertuzzi, would also score. Randy Gazzola, Timotej Sille, and Anthony Beauregard would score for the Foreurs in the loss.

“I thought we came out really strong obviously”, commented Guelph Storm Head Coach Scott Walker on his team’s start, carrying the momentum throughout the game outshooting their opponent 49-33.

Val-d’Or would suffer another loss in the third period with QMJHL Defenceman of the Year Guillaume Gelinas leaving the game due to injury after receiving a hit from Storm defenceman Chad Bauman.

The Foreurs will be back in action on Tuesday night at the 2014 MasterCard Memorial Cup as they take on the WHL Champion Edmonton Oil Kings at 7:00pm EDT on Sportsnet and TVA Sports with the winner securing a berth in Friday’s Semi-Final.

The Storm will wrap up round-robin play on Wednesday against the host London Knights.

This year marks the first time the Storm will compete in the MasterCard Memorial Cup Championship Final since 1998 where they lost to the Portland Winterhawks 4-3 in overtime.