Storm come from behind to win 2019 OHL Championship 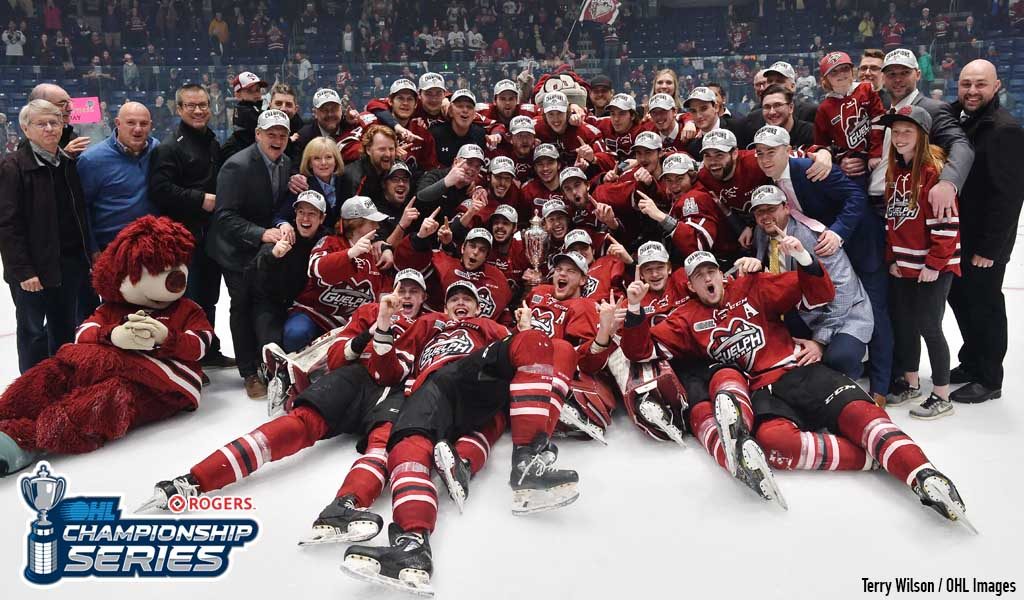 Guelph, ON – It’s been a central theme throughout their wild playoff journey and the Guelph Storm exemplified it once again in Game 6 on Sunday. Down 2-0 after one period, the Storm showed their resiliency, scoring five second period goals en route to an 8-3 win to be crowned 2019 OHL Champions.

The Storm recovered from an unprecedented third 2-0 series deficit to defeat the Ottawa 67’s in six games and hoist the J. Ross Robertson Cup for the fourth time in franchise history.

“Every memory the past four years all the way from my first thing in Guelph is really hitting me right now,” said Ratcliffe on the ice post-game. “All the work we’ve put in, everything we’ve done this year. The resiliency from this team is unbelievable, none like I’ve ever seen before. I’ve never played on a team with this much skill, this much class and this much character. I’m so happy right now and we’re not done.”

“I thought we were a little nervous and we had a few bumps in the road early,” added Storm head coach George Burnett, who also guided the Storm to the franchise’s first championship in 1998. “We got some breaks, a bunch of goals, played the way we can in the second period. They had their chances, it wasn’t an 8-3 hockey game but we’ll take it.”

Things started slow for the Storm as Ottawa defender Noel Hoefenmayer (8) beat goaltender Anthony Popovich on a long shot from beyond the blue line 2:59 into action.

Kody Clark (5) made good on Ottawa’s first power play opportunity before the midway point of the frame, jumping on a rebound with assists from Kevin Bahl and Graeme Clarke at 8:30.

The Storm had their chances in a free-flowing opening frame as the two sides traded scoring opportunities and combined for 25 shots on goal.

Guelph got on the board with the ice still drying early in the second period as Samorukov scored his first of two on the afternoon on a power play blast through traffic.

Ratcliffe scored the equalizer after Anthony Popovich denied Lucas Chiodo of a grade-A scoring chance. MacKenzie Entwistle won a puck battle along the boards, inspiring a shooting opportunity for Ratcliffe who made no mistake at 7:46.

The Philadelphia Flyers prospect struck again seven minutes later, this time taking a power play slap-pass from Nick Suzuki and redirecting it past Ottawa’s Cedrick Andree to give Guelph a 3-2 lead.

Cedric Ralph (4) and Suzuki (16) proceeded to score in quick succession, giving the Storm three goals in a span of 1:14 to suddenly lead 5-2. Ralph took advantage of a goalmouth scramble to beat a sprawling Andree while Suzuki camped out in the slot to deposit a Ratcliffe feed from below the goal line into the back of the net.

3️⃣🚨 in the third period to clinch it.@Samorukov_D@domcommisso19@StevensonKeegan

Ottawa made the most of a five-on-three power play to pull within two after 40 minutes as Sasha Chmelevski (12) put a positive end to what was a miserable second period for the 67’s. The San Jose Sharks prospect scored with 1:08 left as Guelph led 5-3 and outshot Ottawa 18-6 in the middle frame.

The Storm put things out of reach in the third, scoring three times on nine shots as Samorukov blasted another shot through traffic before Domenico Commisso (4) and Keegan Stevenson (3) rounded out the scoring.

Guelph scored a playoff-high eight goals in the win, adding a 2019 championship to past titles in 2014, 2004 and 1998. They overcame three different 2-0 series deficits to come back and eliminate London, Saginaw and Ottawa, winning a record seven elimination games in the process.

“To face seven games where you could be eliminated, it’s a pretty special group,” said Burnett of the team’s accomplishment. “They never lost their poise or their focus and this is the result. It’s a great group of kids and we’re not finished yet.”

The Eastern Conference champion Ottawa 67’s had a remarkable season of their own, setting a new OHL Playoff record with 14 consecutive wins before dropping four straight to conclude the Rogers OHL Championship Series. The Hamilton Spectator Trophy recipient 67’s were led in playoff scoring by veteran forward Sasha Chmelevski (12-19–31) while overage winger Tye Felhaber (17-11–28) led the OHL Playoffs with 17 goals.

The Storm advance to the 2019 Memorial Cup Presented by Kia that gets underway on Friday May 17th in Halifax, Nova Scotia. It will be the Storm’s sixth Memorial Cup appearance as the franchise chases its first championship.