Storm comes up short in 4-2 loss to Halifax 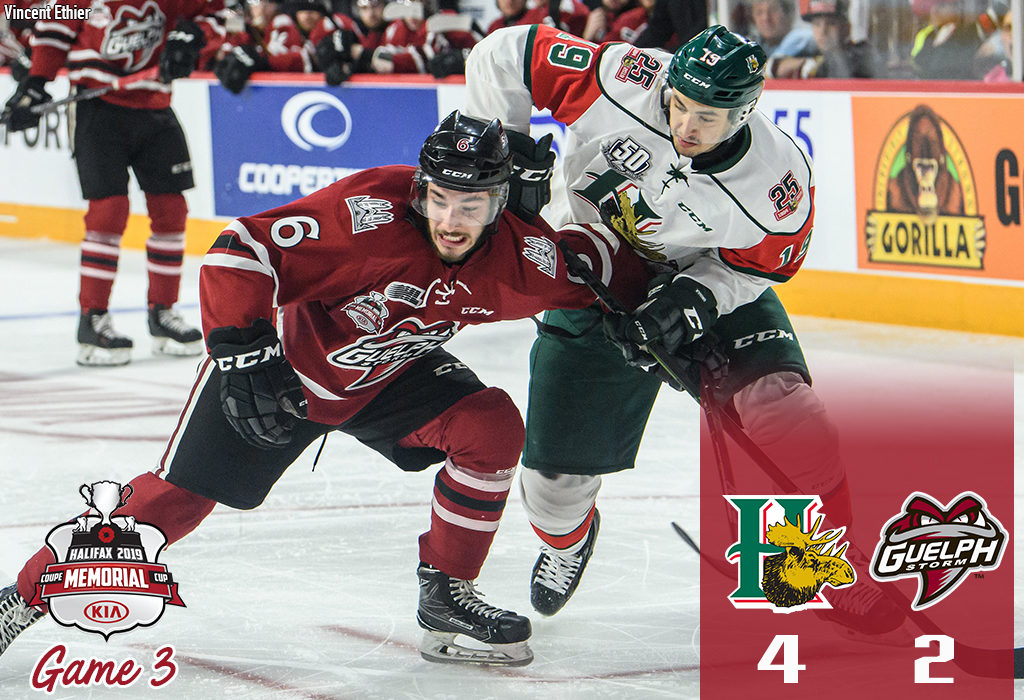 The speed of forwards Antoine Morand, Maxim Trépanier and Samuel Asselin was evident once again while top 2019 NHL Draft prospect Raphaël Lavoie scored arguably the goal of the tournament, finding the back of the net shorthanded to put his team ahead for good.

The Mooseheads joined the 2017 Windsor Spitfires as just the second host team in the past 10 years to begin the tournament with a 2-0 record, outshooting the Storm 42-35 as goaltender Alexis Gravel made 33 saves to earn first star recognition.

Top #NHLDraft prospect blows the roof off the place with a shorthanded masterpiece for @HFXMooseheads who lead Game 3 of #MemorialCup ? pic.twitter.com/O373v2Ac4f

“I think we played a really good game,” said Gravel after the final buzzer. “We didn’t have the start that we wanted but we had a strong second that gave us the lead and it helped a lot.”

Gravel didn’t waste any time getting going, flashing his right-handed trapper to rob Liam Hawel of a scoring opportunity in the opening minutes.

Halifax found the board first as defenceman Jocktan Chainey hit Antoine Morand in the high slot as the Mooseheads captain redirected a shot over the shoulder of Popovich at 5:10.

Guelph kept the pressure on though, striking back inside the final minute of the first period as Los Angeles Kings prospect Sean Durzi scored his first of two on the night. The overage defenceman fired a rocket past a screened Gravel as the Storm netted their 16th shot of the opening period to tie things at one.

Lavoie stepped into the spotlight 6:48 into the second frame, taking a pass from Patrick Kyte before dancing around two Guelph defenders to finish the job shorthanded. The big winger’s highlight reel marker put Halifax up 2-1, a lead they wouldn’t relinquish.

Trépanier cleaned up the garbage moments later at 10:34 to put Halifax ahead 3-1. Morand rung a shot off the iron, inspiring a rebound that lied loose in the goalmouth as Trépanier was in the right spot at the right time to put the Mooseheads up two headed into the second intermission.

Game Story: Mayhem in Moose Country as the Herd clinch at least a berth in the #MemorialCup semi-finals by dumping Guelph 4-2. Details-> https://t.co/MBzMrrvBmq #GoMooseGo #OneToRemember pic.twitter.com/6E6t04znT9

The Storm have refused to go away throughout the playoffs and made a game of things in the third period as Durzi wristed a seeing-eye shot through traffic that made its way past Gravel 1:07 into the third.

Halifax halted the comeback effort at 7:20, swarming the Guelph net off an initial shot from Asselin. The veteran forward crashed the net for the finish to put the Moosheads up 4-2 with an assist from Trépanier.

The Storm had a hard time generating offence late in the game as five penalties in the latter half of regulation stalled their momentum.

The Halifax win came before a crowd of 10,036 in Moose Country as the hometown team will have two days off before facing the rival Rouyn-Noranda Huskies to wrap-up preliminary play on Wednesday.

“We wanted that win big time,” said Asselin. “I think we came out strong. The fans are unbelievable, they gave us so much momentum tonight and I’m so happy for them.”

Guelph falls to 1-1 and sees a five-game winning streak come to an end.  The Storm will try to rebound Tuesday night when they take on the WHL champion Prince Albert Raiders (0-1).

“It’s a tournament where the little things are going to get called and I was on the short end of a lot of that and that can’t happen,” said Storm captain Isaac Ratcliffe, who took three minor penalties on the night. “I made a lot of mistakes tonight and it cost my team. I’ve got to be a leader out there, I’ve got to lead by example and I didn’t tonight. I’ve got to take this loss on my shoulders and make sure we’re ready to go in the next game.”