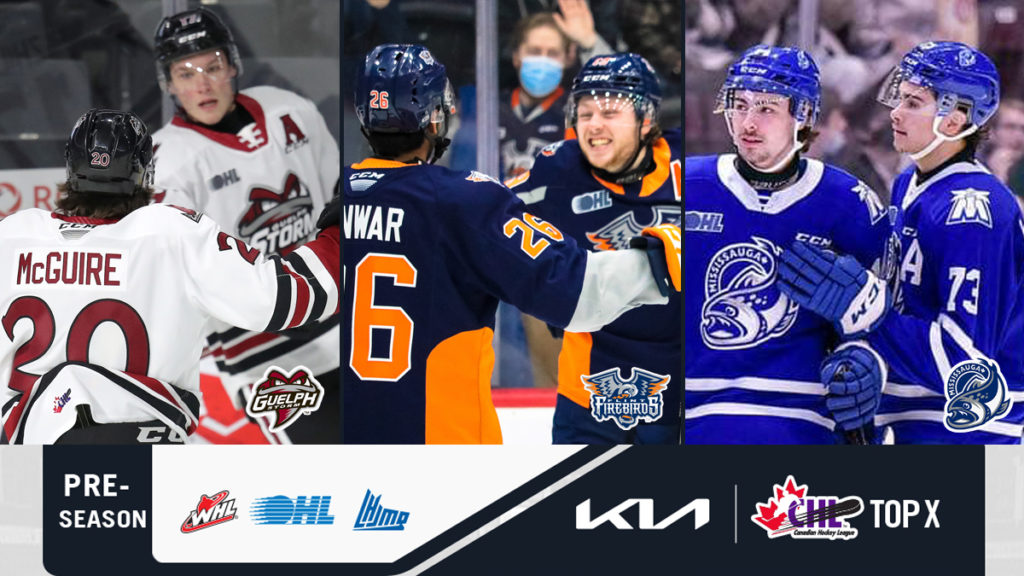 The Canadian Hockey League announced today the preseason edition of the Kia CHL Top-10 Rankings for the 2022-23 season.

Summer draftees highlight the top-ranked Winnipeg ICE where the dynamic duo of Conor Geekie (Arizona Coyotes) and Matthew Savoie (Buffalo Sabres) prove to be a dynamic one-two punch. Finishing last season atop the WHL with more than 300 goals, the two lead an offensive juggernaut in the Manitoba capital that also counts budding talents like 17-year-old centre Zach Benson, a top talent for the 2023 NHL Draft class whose terrific freshman season saw him finish sixth in scoring among WHL rookies.

Headlining the QMJHL, the Quebec Remparts will look to build on a dominant 2021-22 campaign that saw the club finish atop the circuit with 104 points backed by the solid pairing of St. Louis Blues draftee Zachary Bolduc and now overager Theo Rochette, both of whom neared triple-digit production a year ago. The summer also saw the Remparts see another of their own realize a lifelong goal as the Anaheim Ducks called upon centre Nathan Gaucher with the 22nd pick in the 2022 NHL Draft.

The Seattle Thunderbirds made impressive strides a year ago and now look to make the next step in 2022-23 following an offseason makeover highlighted by the addition of veteran talent Kyle Crnkovic from Saskatoon. Finishing fifth in league scoring last season with 94 points, Crnkovic joins an offensive nucleus in Seattle that also counts left-wing Reid Schaefer (Edmonton Oilers) and defenceman Kevin Korchinski (Chicago Blackhawks), both 2022 first rounders, the latter who a year ago led all WHL freshmen rearguards with 65 points.

The favourite to make the most noise in the OHL, it was an exciting summer for the Guelph Storm as the club witnessed four of its own chosen in the 2022 NHL Draft. That group will now take hold of the team’s offensive reins this season, headlined by forwards Danny Zhilkin (Winnipeg Jets) and Matthew Poitras (Boston Bruins). Meanwhile, talent evaluators will have plenty of reason to head to Guelph again this season as budding blue-liner Cam Allen projects as an early selection in the 2023 class.

Hosts of the 2023 Memorial Cup presented by Kia, the Kamloops Blazers are an obvious favourite to hoist CHL supremacy at year’s end, but the club also brings the roster composition to back up that honour. Led by Dallas Stars up-and-comer and 2021-22 CHL Player of the Year Logan Stankoven, the Blazers bring a well-rounded lineup heavy with star power that has earned recognition on the national stage, like New York Rangers draftee and 2021-22 CHL Goaltender of the Year Dylan Garand.

Ready to take the next step, the Gatineau Olympiques showed early signs a year ago of what was to come with an exciting crop that will only continue to blossom. Backed by an impressive back end that counts recent draftee Tristan Luneau and Noah Warren – both of whom were chosen by the Anaheim Ducks in the 2022 class – the Olympiques bring a well-balanced attack up front where they will look for talents like the undrafted Antonin Verreault to continue to show solid progression.

Following their best season in franchise history, the reinforced Flint Firebirds will look to build on that success in 2022-23, beginning at the forward ranks where returning captain and New York Rangers first rounder Brennan Othmann will again challenge for the OHL scoring lead after wrapping up last year with 50 goals and 97 points. The Firebirds will also see a new face in the blue paint with the addition of hulking netminder and St. Louis Blues draftee Will Cranley who is set to assuming the starting duties.

Returning one of the circuit’s most impressive pairings in Luca Del Bel Belluz (Columbus Blue Jackets) and Owen Beck (Montreal Canadiens), the Mississauga Steelheads offer up dynamic offensive abilities that make the club a threat to challenge for OHL supremacy. That scoring success then continues on the blue line where the Steelheads boast captain and Chicago Blackhawks draftee Ethan Del Mastro whose exciting offensive progression from a year ago helped him to earn a spot at this summer’s World Juniors.

Rebuilt and ready, the Sherbrooke Phoenix return with reigning QMJHL point producer and Montreal Canadiens prospect Joshua Roy in tow who dazzled last season to the tune of 51 goals and 68 assists coming in 66 games. Beyond Roy, among the other names to circle is 17-year-old centre Ethan Gauthier, the first-overall selection from the 2021 QMJHL Entry Draft who the scouting community sees as an early selection in the upcoming NHL Draft following impressive early results in the junior ranks.

All eyes will be on the Moose Jaw Warriors this season, especially when it comes to gifted centre Brayden Yager, the 2021-22 WHL Rookie of the Year who approached point-per-game production as a freshman and looks to slot in near the top of the coming NHL Draft. Yager won’t go it alone in Moose Jaw either as the club’s roster also counts recent draftees including centre Jagger Firkus (Seattle Kraken) and defenceman Denton Mateychuk (Columbus Blue Jackets).

Inching closer to the national spotlight, the Owen Sound Attack will be must-see this season for talent evaluators as now sophomore left-wing Colby Barlow will take on greater offensive duties ahead of his projected first-round selection in the upcoming NHL Draft.

The climb up the ranks begins this season for the Halifax Mooseheads as the club returns a well-rounded offensive core headlined by newly minted Columbus Blue Jackets draftee Jordan Dumais who was one of only seven QMJHL skaters to reach triple-digit production last season.

Among the top teams in the circuit a year ago, the transition in underway for the Portland Winterhawks as the club turns over the reins to the next wave, a group that includes budding talents like Jack O’Brien and James Stefan.