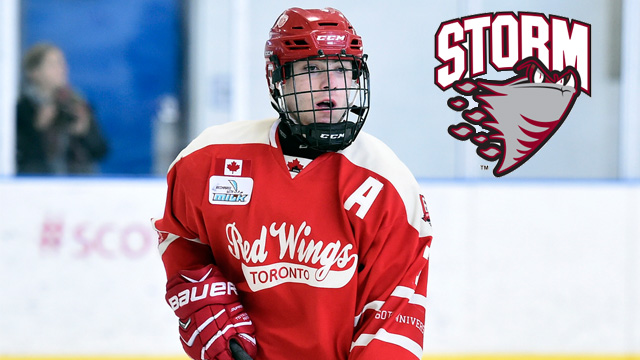 Guelph, ON – The Guelph Storm Hockey Club announced today that third round selection Luke Moncada has agreed to terms on a Standard Player Agreement with the team.

“We are thrilled that Luke has opted to further develop his significant athletic and academic abilities as a member of the Guelph Storm”, GM Mike Kelly said. “Luke possesses elite level competitiveness and hockey sense. His size and strength allows him to play a very effective power forward type game. We welcome Luke and his family to the Storm organization.”

In the OHL Cup, the Scarborough native maintained a point-per-game production rate, tallying five points (two goals, three assists) in five games with six penalty minutes. He most recently took part in the OHL Gold Cup in Kitchener finishing third with Team GTHL Red and recording one assist in the tournament.

Luke was most recently on hand at the Prospects Fitness Day in May at Shift Fitness. The 16 year old will join the rest of the Storm for training camp in late August.