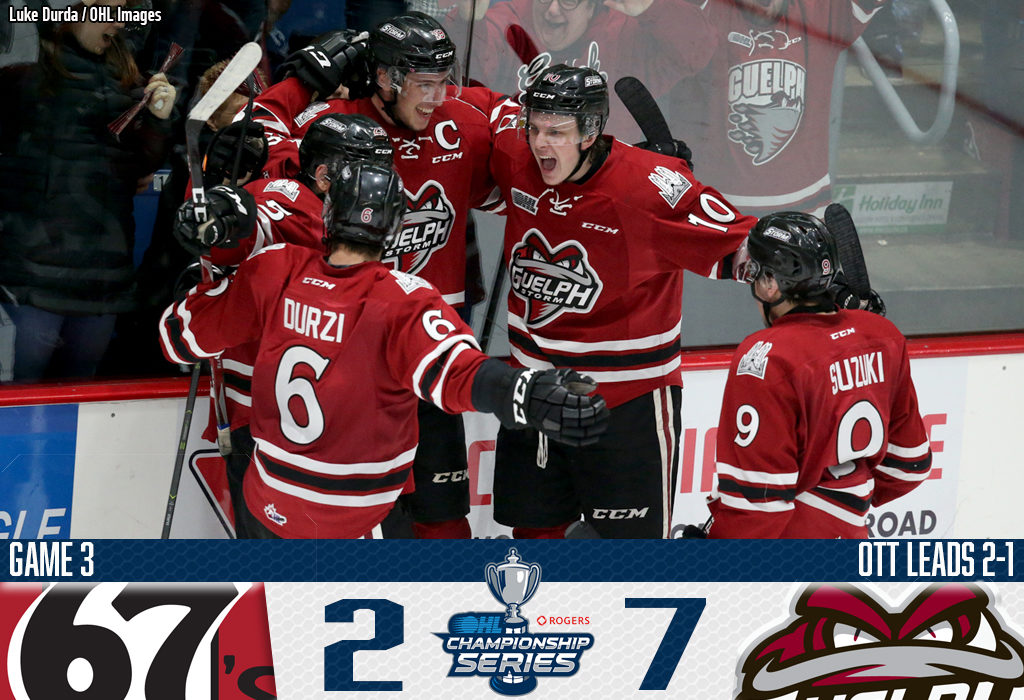 Guelph, ON – The Ottawa 67’s saw their run of perfect playoff hockey come to a grinding halt on Monday night in Guelph as the hometown Storm, in a scenario we’ve seen play out twice before, rallied before a sold out crowd to claim a commanding Game 3 victory.

Alexey Toropchenko (9, 10), Isaac Ratcliffe (11, 12) and MacKenzie Entwistle (6, 7) all scored twice as the Storm flashed more of their series-trailing desperation at the Sleeman Centre in a 7-2 win.

“It was important for us to respond tonight, I thought our energy was high,” said Storm head coach George Burnett. “I thought when we made mistakes I think our second effort was much stronger. We stopped and battled a lot more than we saw in the first two games.

“The response from our group tonight shows you how much they care,” he continued. “They want to be a part of this final and they want to keep moving forward and try and take another one on Wednesday night.”

The 67’s, who hadn’t surrendered seven goals in a game since September 23rd, were without the services of both goaltender Michael DiPietro and blueliner Kevin Bahl facing a determined Storm team that came out throwing its weight around after falling behind 2-0 in the series.

Ratcliffe got the scoring started 4:08 into action, taking advantage of some strong puck work from linemate Nick Suzuki to give the Storm a 1-0 lead.

Ottawa answered back just over a minute later as Sasha Chmelevski (10) found the back of the net on the power play to score for a third straight game.

Toropchenko had help from Cedric Ralph and Pavel Gogolev to give the Storm a 2-1 lead headed to the first intermission as Guelph outshot Ottawa 12-7.

Arizona Coyotes prospect Nate Schnarr (6) got the monkey off his back 59 seconds into the second frame, snapping a six-game goal drought to put the Storm up two before Ottawa replied once again as draft eligible winger Graeme Clarke (7) took advantage of a goal mouth scramble to beat a sprawling Anthony Popovich at 6:30.

Toropchenko, who also scored twice in Ottawa on Saturday, continued his offensive surge with less than four to go in the second. The St. Louis Blues prospect outmaneuvered a pair of Ottawa defenders to snipe a spin-around shot through the legs of Cedrick Andree and give the Storm insurance.

Guelph pulled away for good in the third as Entwistle scored twice and Ratcliffe chipped in his second of the night for a 7-2 final. A crowd of 4,898 at the Sleeman Centre went home happy.

“It’s the OHL Finals and for the city of Guelph to get behind us like they have and for us to play in front of a sold out building it makes it fun,” said Entwistle post-game. “It’s tough to keep your emotions in check but that’s often the difference between winning and losing. I thought we did a good job of that tonight.”

A @Storm_City warning in full effect 🌪

2️⃣🚨 by @5twisty5 in the final frame bookend a second from @isaacratcliffe to secure a home side victory to get back in the series.#OHLChampionship | #OTTvsGUE pic.twitter.com/GZ1Ossw8VZ

The 67’s were outshot for the second time in the series as the Storm controlled the shot clock to the tune of 36-20.

“I think Guelph played a really solid game, they came out really strong,” said 67’s head coach Andre Tourigny following his team’s first loss of the 2019 OHL Playoffs. “Our focus was not probably in the right place but give a lot of credit to them, they played really hard, they played well.

“They were the best team on the ice today and that’s why they won.”

Suzuki and fellow ex-Owen Sound Attack teammate Sean Durzi each finished with three assists and both had plus-4 plus/minus ratings in the win. Suzuki’s league-leading 35 playoff points (14-21–35) tie him with Martin St. Pierre (2004) for the most in Storm franchise history.

The Storm saw the return of big defender Fedor Gordeev who sat out Game 2 serving a one-game suspension.

Already the first team in OHL history to overcome two different 2-0 series deficits, the resilient Storm look to do it a third time at home on Wednesday night when the puck drops on Game 4 at 7:00pm.