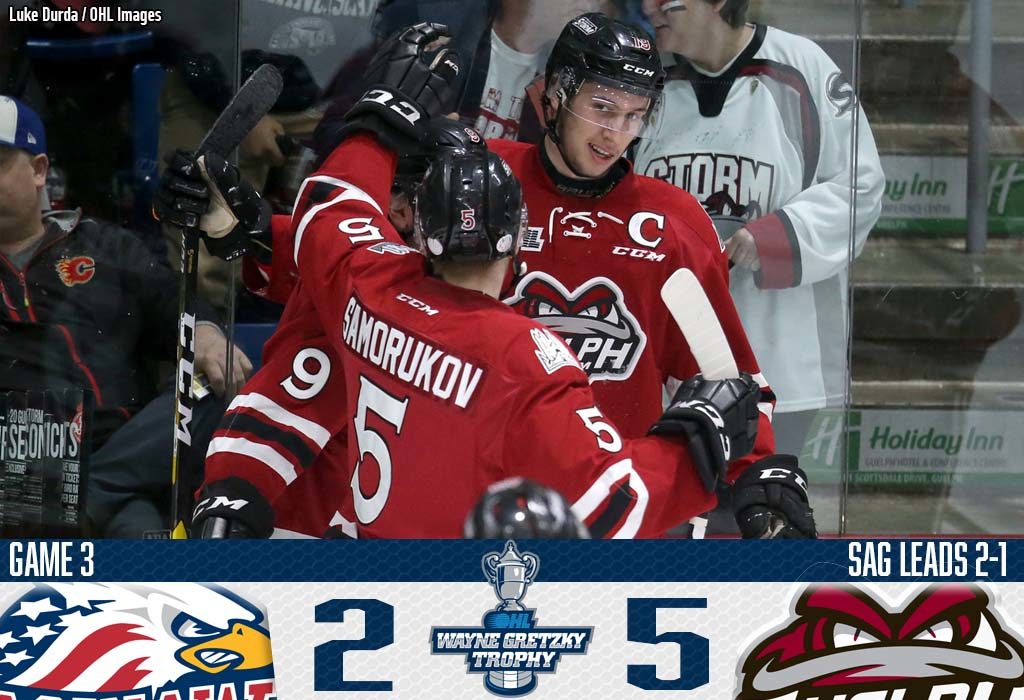 GUELPH, ON – Falling into an early hole in a second straight series, the Guelph Storm returned to home ice for Game 3 and skated to a 5-2 victory over the Saginaw Spirit, giving themselves some life in the Western Conference Championship Series.

What a moment for @cedricralph14 🚨

The Storm threw everything they could at Lennox, outshooting the Spirit 46-22, but the late 2002-born netminder handled himself well before a crowd of 4,698 in Guelph, giving his team a chance to win.

Guelph’s Zachary Roberts (2) opened the scoring with 4:11 left in the opening period, tipping a Fedor Gordeev point shot past Lennox from the slot before Isaac Ratcliffe (8) opened the second period on a high note, sending a wrister over the shoulder of Lennox as he crossed the top of the circle.

Saginaw showed some good fight, coming back to tie things up as Owen Tippett (10) beat Anthony Popovich up high over the short side before Reagan O’Grady (2) connected with Cole Perfetti and Cole Coskey with 1:24 left in the middle stanza to send things to the third all square.

Fleet-footed Storm forward Cedric Ralph (1) stationed himself in the slot for a nice Sean Durzi feed 2:20 into the third to score the eventual game winner before Nate Schnarr (5) provided insurance with 7:02 to go and Keegan Stevenson (1) hit the empty net to seal the deal.

Defencemen Gordeev, Durzi, Dmitri Samorukov and Jack Hanley all had assists in the Storm victory, drawing praise from head coach George Burnett who wants to see his team get offensive input from throughout the lineup.

“We got some good contributions from the back end tonight with pucks to the net,” he said. “We’re a whole lot more difficult to play against if we’ve got three or four lines kicking in offence and that happened tonight.”

Though the Spirit came up short, Lennox’s 41-save performance was a topic of discussion during the post-game press conference, with Burnett commending the young netminder on his work.

“We tried to approach it the same way, he’s a talented young goaltender. He’s one of the elite 2002 goaltenders coming into our league this year, so he wasn’t a susprise to me. We wanted to make him work tonight.”

“At the end of the day we were neck and neck with a pretty good hockey club, but we didn’t generate enough shots.

“You can’t score goals at this time of year if you don’t have second and third chance opportunities. On our penalty kill we’ve got to find a way to tighten it up a little bit. Our power play to this point has to be more relevant.”

Lennox became the first OHL goaltender to draw a start in the Conference Finals during his 16-year-old season since Alex Nedeljkovic of the Plymouth Whalers in 2013. Across the ice, Guelph’s Anthony Popovich picked up the win with a 20-save performance.

The Storm look to keep the momentum rolling back at home on Wednesday night when the puck drops at 7:00pm for Game 4.