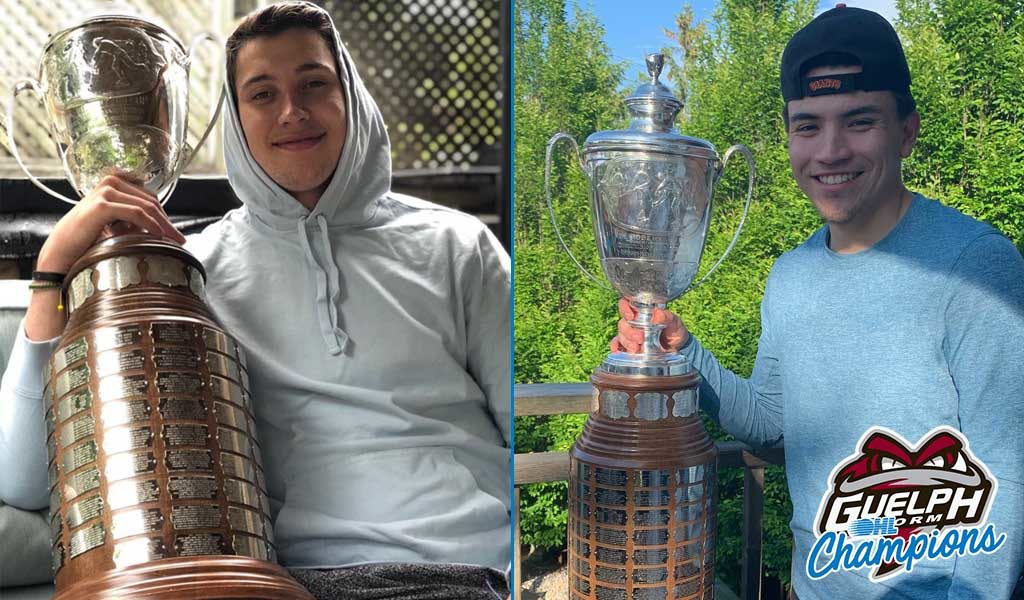 OHL Playoff MVP Nick Suzuki and four-year Storm veteran and captain Isaac Ratcliffe had a chance to celebrate with the J. Ross Robertson Cup this past weekend in the Forest City, kicking off the Storm’s summer-long Robertson Cup road tour as each player will enjoy a day with the trophy.

Ratcliffe, who has four siblings, celebrated with family while dog Howie even had a chance to get into the Cup for a snapshot.

The 20-year-old, who signed a three-year entry level contract with the Philadelphia Flyers back in August 2017, rounded out his fourth season in Guelph with the second-most career goals (124) in franchise history. His 50 this past season made him the fifth Storm player to reach the half-century mark in a single season.

Childhood friend and London Jr. Knights Minor Midget teammate Nick Suzuki had his immediate family and grandparents on hand for a small celebration. Younger brother Ryan of the Barrie Colts, who is considered a top prospect ahead of the coming weekend’s NHL Draft, had a chance to take part.

A Montreal Canadiens prospect, Suzuki racked up 328 points (141-187–328) over four OHL seasons between Guelph and Owen Sound. His 42 points in the 2019 OHL Playoffs set a new Storm franchise record. He’s also the first player in OHL history to earn the League’s Most Sportsmanlike Player Award three years in a row.

The Championship Celebration Tour continues next weekend. Follow the Guelph Storm on Instagram at @guelph_storm_ohl for live coverage.