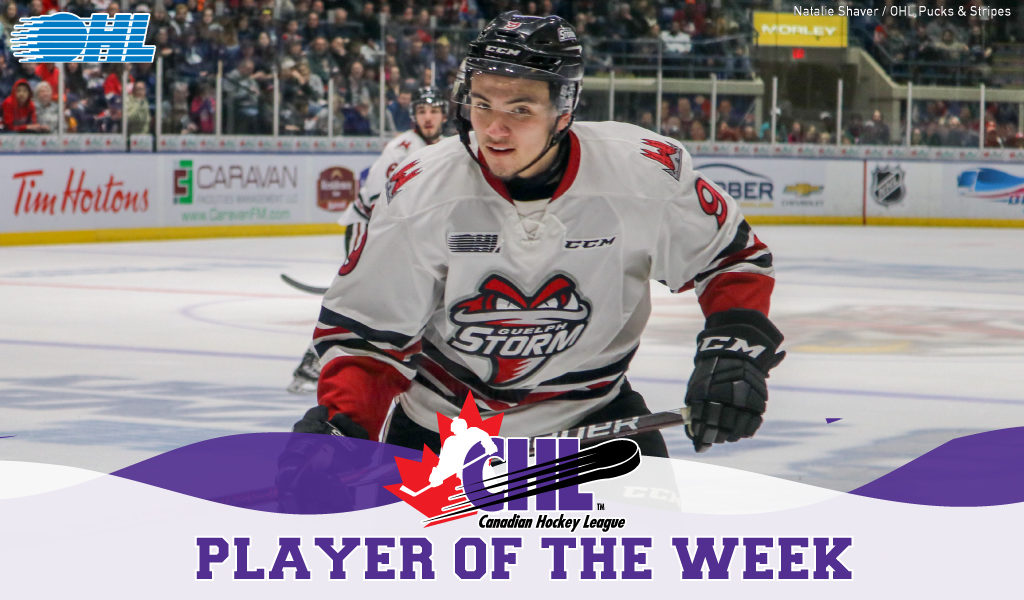 Toronto, ON – The Canadian Hockey League today announced that forward Nick Suzuki of the Guelph Storm is the CHL Player of the Week for the final week of playoff action ending May 12 with 10 points in four games including two goals and eight assists with a plus-minus rating of plus-8.

The Montreal Canadiens prospect began his week with a trio of assists in Game 3 versus the Ottawa 67’s en route to a 7-2 victory that helped draw his club within one. Two nights later, he picked up first-star recognition in Game 4 after potting one goal and two assists, including a helper on the game-winning tally, to lead the Storm to a 5-4 win. Guelph then drew the series lead thanks to a 4-3 road victory in Game 5 that saw the budding centre add another assist. Suzuki then closed out the series with another three-point effort, counting one goal and two assists, earning him third-star honours, as the Storm routed the 67’s by an 8-3 score in Game 6 to mark their third-straight playoff series comeback as the club claimed the J. Ross Robertson Cup for the first time since 2014. The Storm now advance to the 2019 Memorial Cup presented by Kia, with their first round robin contest coming Saturday versus the Rouyn-Noranda Huskies.

Across 24 playoff appearances, Suzuki recorded 16 goals and 26 assists for 42 points to set a Storm franchise record. For his efforts, the London, Ont., native was awarded with the Wayne Gretzky ‘99’ Award, presented to the most valuable player of the Ontario Hockey League playoffs. The 2018-19 campaign marked the fourth OHL season for Suzuki, who over 251 regular season career games has registered 141 goals and 187 assists for 328 points. Suzuki was originally selected by the Vegas Golden Knights with the 13th overall pick in the 2017 NHL Draft.

Also considered for the award this week was Prince Albert Raiders right-wing Brett Leason, who notched three goals and four assists for seven points in four games against the Vancouver Giants in the WHL’s Ed Chynoweth Cup Final, as well as Rouyn-Noranda Huskies captain Rafael Harvey-Pinard, who recorded five goals and three assists for eight points in four appearances in the QMJHL’s President’s Cup Final versus the Halifax Mooseheads.